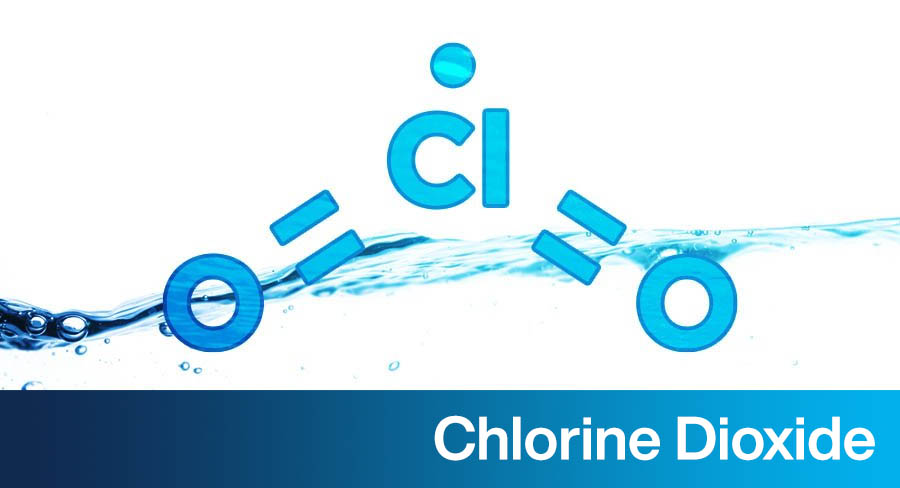 In its pure state, chlorine dioxide (ClO2) is a reddish yellow gas at ambient conditions. Its smell is similar to chlorine, reminiscent of nitric acid. Its solubility in water at atmospheric pressure and 25 ° C is close to 3 g / L (≈ 3000 ppm).

It is highly oxidizing and reacts violently with organic materials. In its gaseous state, at concentrations above 10% in air at atmospheric pressure, it detonates easily in the presence of sunlight, heat or in contact with mercury, phosphorus, potassium hydroxide, sulfur, mercury or carbon monoxide.

No cases of significant health effects have been reported from ingestion. Ingestion toxicity levels:

Severe respiratory irritant. It can cause bronchospasm and pulmonary edema, although not immediately. It can also cause a severe headache. All symptoms may appear late and be persistent. Long-term exposure can cause chronic bronchitis.

It is not considered carcinogenic. It is not listed by IARC (International Agency for Research on Cancer) or by ACGIH (American Conference of Governmental Industrial Hygienists).

Synergistic materials:May have synergistic effects in conjunction with chlorine, other chlorine oxides and chlorine fluoride compounds.

When chlorine dioxide dissolves in water, most of it does not hydrolyze: it remains as a dissolved gas in solution. Another part does, and forms as much chlorite ion (ClO2–) as chlorate ion (ClO3–).

The solubility of chlorine dioxide in water at sea level and at 25 ° C is close to 3 g / L (≈ 3000 ppm). Its solubility increases at lower temperatures. For this reason, when its concentration is higher than 3 grams per liter, it is common to store it at temperatures close to 5 ° C.

Dissolved in pure water, in a hermetically sealed container, in the absence of light, and at low temperature, it is quite stable although it slowly decomposes into chlorine and oxygen. Chlorides catalyze its decomposition.

Chlorine dioxide as a biocide

It is effective at pH values between 4 and 10. Its low oxidation potential does not allow it to oxidize organic compounds; that is, it does not break CC or CH bonds. Therefore, unlike free chlorine, it does not form chlorinated organic compounds, as by-products of disinfection (some of these, such as trihalomethanes, are carcinogenic). It only reacts when it finds atoms eager to donate electrons (that is, to undergo oxidation), which are common in proteins that are part of exogenous microorganisms.

Chlorine dioxide does not react with ammonia (NH3) or ammonium hydroxide (NH4OH) and hardly reacts with elemental amines.

Although the chemistry of chlorine dioxide in aqueous solution has not been fully studied, the results of scientific studies have been enough for health authorities around the world to have included it as one of the oxidizing compounds allowed to disinfect water for the purpose of purification.