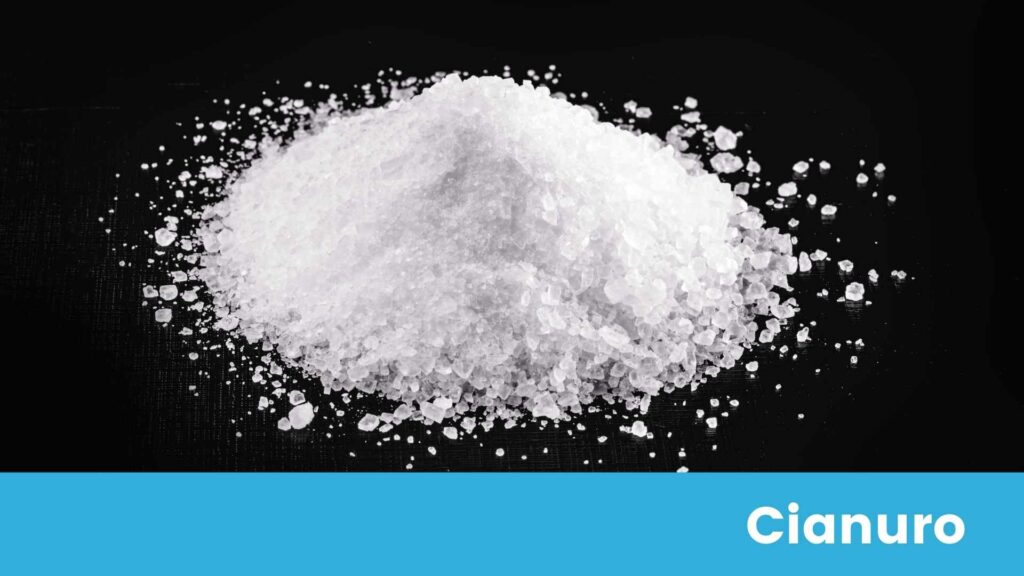 Cyanide is a representative monovalent anion consisting of a carbon atom and a nitrogen atom joined by a triple bond.

Where is it located?

It is produced by the decomposition of some plants, in fact it can be present in some foods such as green almonds and cassava, it can also be produced by microorganisms. Cyanide is also used to extract gold and silver from ores.

How can you be exposed to this substance?

You can be exposed by breathing air, drinking water, eating food, all from both natural processes and industrial activities. when present in air, it is usually in the form of gaseous hydrogen cyanide.

One of the main sources of cyanide is cigarettes and it affects people who do not work in industries related to this chemical.

How does it work?

The degree of cyanide poisoning is directly related to the amount to which the person is exposed and the length of time he/she has been exposed. Breathing gas with this component is the most harmful, but ingesting it can also be toxic.

Logically, cyanide gas is more dangerous in places that are closed because it is trapped. This gas evaporates and disperses quickly in open spaces, making it less harmful.

Cyanide gas is less dense than air, so it rises. Cyanide does not allow the body’s cells to use oxygen and this causes the cells to die.

Cyanide is more harmful to the heart and brain than to other organs because they use more oxygen than the others.

Anyone who has been exposed to this chemical by ingesting it, breathing it in or absorbing it through the skin may exhibit the following symptoms within minutes:

Exposure to large amounts of this chemical by any route can cause these other effects:

How is cyanide poisoning treated?

Specific antidotes and medical care in a hospital are used. Antidotes for this type of poisoning are most useful if administered as soon as possible after exposure, even before laboratory confirmation.

This chemical can be found in industrial wastewater streams that are generated by the extensive production of goods and materials, including refined metals and alloys, leather, paints, pigments, wood preservatives, chemicals and electronic products. Cyanide in wastewater often requires wastewater treatment.

Which technologies are the best to remove it from wastewater?

A variety of technologies are available to treat wastewater and remove cyanide. In any separation or treatment solution, the choice of the best cyanide removal technology comes down to suitability for the specific needs required at your facility.

A basic tip we can tell you is to check what cyanide species are present in your waste stream. Cyanide species can be classified into two groups:

They are cyanide compounds in which the cyano group shares a strong bond with a metal such as gold, iron, silver or cobalt. SAD cyanides normally cannot be oxidized or decomposed, and must be removed by physical separation means, such as precipitation or membrane filtration.

These are cyanides that are readily dissociable at neutral pH or below, which include free cyanide anions, hydrogen cyanide and other species where the cyano group shares weak bonds with metals such as copper, nickel, zinc and cadmium. WADs are more toxic and less chemically stable. Canid WADs can normally be decomposed by biological or chemical means to obtain products with less toxicity in a process known as cyanide oxidation or cyanide destruction.

Other factors to consider are also the pH of the stream, temperature, flow rate, volume, current concentration and the target for cyanide use in the stream. It is vital to consider these aspects as only then can we understand what types of wastewater disposal and treatment strategies are best for your facility.

The following are the most common processes for the elimination or reduction of cyanide in wastewater:

This technology is very popular for separating streams with high SAD cyanide contents. The process consists of metals or metal cations to a wastewater stream, which react with the cyanides present to form new metal-cyanide complexes or precipitates. The precipitated particles can then be removed from the liquid stream by a physical separation process, such as sedimentation or media filtration.

The adsorption method is widely used in cases where the cyanide concentration is relatively low. Adsorption works by harnessing the forces of molecular attraction to remove all contaminants from a liquid stream. The process consists of passing wastewater through some type of adsorbent medium that serves to attract and retain contaminants.

The advantages of adsorption are its relatively low cost of operation, materials and waste discharge. Furthermore, in some cases the adsorbed cyanide can be recycled and reused.

A physicochemical treatment process in which a liquid stream is passed through a resin substrate that facilitates the exchange of charged ions. The resin used is carefully selected according to the ionic charge of the contaminant(s) to be removed. The resins typically used to remove this chemical are chelating or strong base anion resins.

When the stream enters the column, the resin captures the cyanide anions from the solution, retaining them until the resin regenerates.

A type of physical separation technology that uses a semi-permeable barrier to selectively remove certain contaminants from liquid streams. In membrane separation, the water stream is passed through a porous membrane, usually by applying pressure to the stream. The membrane has precisely sized pores to retain the desired ions, molecules or particles, while allowing the passage of water and other components in the stream.

Facilities typically use reverse osmosis or electrodialysis to remove anions. In some cases, microfiltration or ultrafiltration systems are also used to increase efficiency by pretreatment of the streams prior to reverse osmosis.

A chemical oxidizer is used to break the carbon-nitrogen triple bond of WAD cyanides. This causes a reaction that forms cyanate, a much less toxic compound that persists less in the environment.

Chemical addition is the most common oxidation method, but other commonly used chemical oxidizers such as hydrogen peroxide, chlorine, oxygen, hypochlorite and sulfur dioxide, etc. are also available. All oxidants are capable of attracting electrons from the anion to form cyanate.