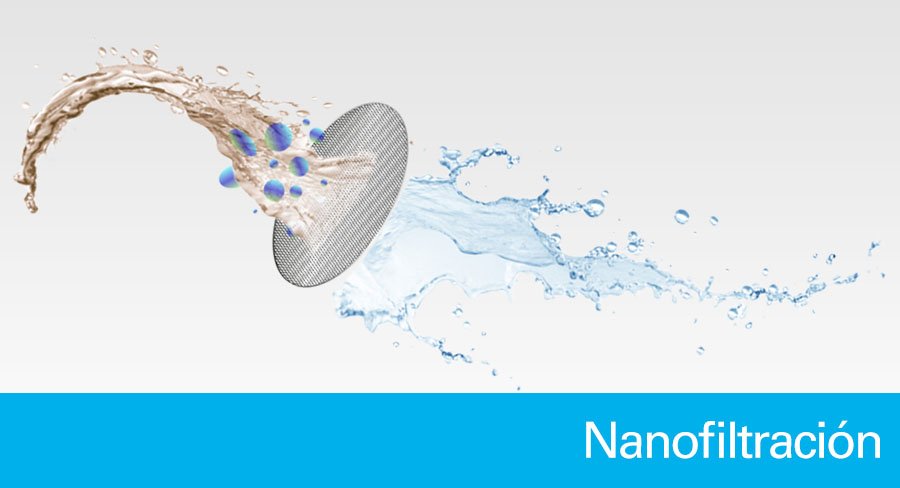 Nanofiltration is a filtration process using a nanoporous membrane that is used in waters with low total dissolved solids. The purpose is to remove polyvalent ions, in addition to disinfecting it by retaining organic matter.

The sizes of these nano-bodies that form the transition between microporous and dense films can be in the range of 0.5 – 1 nm (Baker, 2004). Nanofiltration membranes are generally believed to have a nominal limit value between 1000 and 200 Da.

Organic compounds have a higher molecular mass than membranes. The mass transport mechanism is highly dependent on the membrane structure and the interactions between the membrane and the transport molecules. Separation efficiency can be controlled by screening effects (where nanopore size and solute particle size play an important role) or the dissolution and diffusion properties of the solute particles.

In the case of charged particles, the electric field has a certain transport effect. Three parameters are important for the performance of a nanofiltration device: solvent permeability or membrane flux, solute removal and yield or recovery. Let us consider the most important expressions that can predict the separation efficiency of nanofiltration.

How do these systems work?

Nanofiltration is a cross-flow filtration technology. The pore size of the membrane is approximately 1 nm, and the pressure to use it (75 psi) is less than that of reverse osmosis (150 psi).

The biggest drawback of this system is that it allows monovalent ions to pass through.

The nanofiltration process is capable of lowering the concentration of total dissolved solids, although to a lesser extent than RO.

Nanofiltration can be used in various applications such as:

Classification of separation membranes, according to their pore openings

Industrial applications of nanofiltration are common in the food and dairy, chemical processing, pulp and paper and textile industries, although the main application remains in freshwater treatment, processes and foams.

In water treatment, NF is used for polishing at the end of conventional processes. It cannot be used for desalination, but it is an effective water softener because the main hardener chemical is divalent. At first glance, NF appears to occupy little space in the MBR (membrane bioreactor) process because the higher transmembrane pressure differential required for NF is not available in most bioreactor systems, but MBR has a number of specific biological reaction applications.

Find a location. Smith’s review covers the entire field of nanotechnology, including references to 2 nm NanoCeram alumina argonide fibers for filtering 99.9999 % of bacterial, viral and protozoan cysts (currently available in the form of Ahlstrom Disruptor technology). NF membranes are also used to remove natural organic substances from water, especially taste, odor and color, and to remove traces of herbicides in large water streams. They can also be used to remove disinfectant residues from drinking water.

There are many applications in the food industry. In the dairy industry, NF is used to thicken and absorb whey from other whey processes, as well as for on-site recycling. During sugar production, NF concentrates glucose syrup and fine sugar water while desalting the ion exchange brine. Nanofiltration is used for defoaming solution in cooking oil processing, continuous cheese production and alternative sweetener production.

Chemical industries (including petrochemicals and pharmaceuticals) can have as many different applications as the rest of the industry combined. Much more of what is used in plants is still in the concept stage, but NF is a valuable contribution to the chemical industry as a whole. Salt production from natural brine uses NF as a refining process, whereas most chemical processes produce highly toxic residues from which valuable chemicals can often be obtained. The high value of many pharmaceutical and biotechnological products allows the use of NF in their purification processes.

The pulp and paper industry uses large amounts of water in its manufacturing process, and the industry is working to reduce this amount, mainly by “closing the water cycle” in systems where the properties of the liquid are low. NF filtering plays an important role.

All of these applications specifically mentioned are water-based, but nanofiltration is not limited to the treatment of water suspensions. In fact, one of the largest NF facilities is installed in a crude oil refinery for oil separation. In their review of nanofiltration of organic solvents, Boam and Nozari indicate that many separation processes in organic systems consume a lot of energy and that NF could be an economical alternative that saves a lot of energy (compared to distillation, for example).

In water treatment systems, nanofiltration uses hydrophilic polymeric materials such as polyethersulfones, polyamides and cellulose derivatives. These materials rapidly lose their stability when exposed to organic solvents. As a result, special membranes with performance similar to aqueous systems have been developed and are now used for solvent exchange, solvent recovery and separation, catalyst recovery and heavy metal removal.

Difference between nanofiltration and reverse osmosis

While reverse osmosis systems can remove up to 99% of chloride and sodium, nanofiltration membranes typically remove only 50-80%. This percentage depends on the type of material and the film manufacturing process. However, due to its effectiveness in removing multicharged ions, nanofiltration is the preferred option for removing water hardness without affecting total dissolved solids, rather than reverse osmosis.