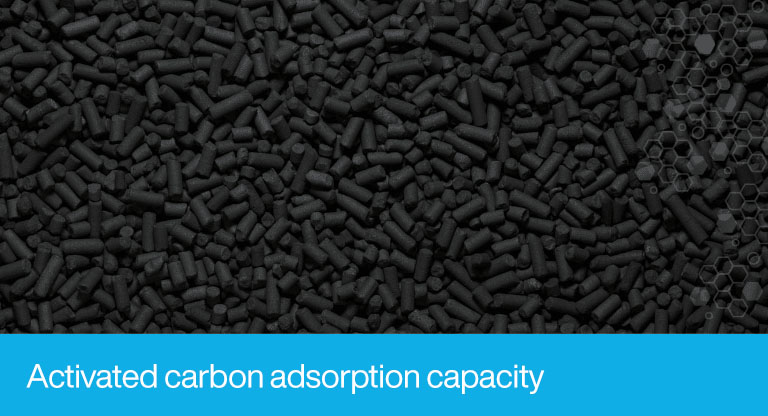 The capacity of an activated carbon depends on several factors. The main ones are listed below.

In addition to the pores in which most of the adsorption phenomenon will occur, it requires transport pores. They are larger in diameter that facilitate diffusion.

An activated carbon can be produced with various degrees and types of oxidation. The oxidation of an activated carbon produces the formation of oxides at the edges of the graphitic plates. If the oxides are acidic in character, they will attract basic molecules and reject acidic molecules. And vice versa.

The particle size of a carbon, be it powder, granular or pellet, affects the adsorption kinetics. The surface area of an activated carbon is practically not altered by the average particle size of the carbon. But while this size is smaller, the pores of the carbon are shortened, and the access routes to them increase. This substantially increases the adsorption kinetics.

Presence of acidic or alkaline groups

Activated charcoal prefers the highest mass molecules that will fit in its pores.

Rounded molecules, such as cyclic or branched ones, enter pores more easily. More linear molecules enter less easily when their size allows them to enter the pores of the carbon only when they impinge with the proper relative orientation. This phenomenon is known as steric effect or of orientation.

Related to the fluid to be treated

The more competition from molecules that do not require separation from the fluid, the shorter the useful life of the activated carbon.

The pH also affects the reaction rate between activated carbon and oxidant molecules (such as free chlorine, ozone, hydrogen peroxide, potassium permanganate…). Normally, at a lower pH, the reaction rate is higher.

Cross-sectional area to flow and depth of bed

The thinner a carbon bed, the greater the turbulence, which increases the diffusion of adsorbates out of the pores of the carbon. In addition, it increases the relationship between the depth of the bed and the mass transfer zone, which leads to better use of the coal.

The higher this ratio, the longer the contact time between the carbon and the fluid, which is desirable.

With greater turbulence, the diffusion of adsorbates outside the carbon particles increases. This is very beneficial.

Would you like an expert to recommend the most efficient coal for your process?

Send your request to the mail: [email protected]

Or visit our page: