Chlorination is the most common method for disinfection of water. However, free chlorine was found to form chemical by-products harmful to human health. This is why many treatment plants after primary disinfection add ammonia to convert residual free chlorine into combined chlorine (chloramianas). These also form by-products, although they do so to a lesser extent.

Free chlorine disinfection is generally accomplished through the use of chlorine gas or sodium hypochlorite. When chlorine gas is injected into water, it dissolves and reacts to form hypochlorous acid (HOCl) and hydrochloric acid (HCl):

When sodium hypochlorite is added to water, it reacts to form hypochlorous acid and sodium hydroxide:

Hypochlorous acid (HOCl) is the chemical species that provides the greatest disinfectant power, as it is a weak acid, it partially dissociates to form hypochlorite ions (OCl-). The degree of dissociation will depend on the pH:

The pKa for HOCl is 7.6 at 20 ° C; This means that below this pH value, HOCl is the species that is predominantly formed, while at higher pHs the formation of OCl predominates.–. This variable can be vital for disinfection, since HOCl disinfects faster, so it is more powerful than OCl–. If what is sought is to reduce the consumption of chlorine, it must be guaranteed to be within the range (4.5 – 7.0) of pH that favors the formation of HOCl. In figure 1, the behavior of the free chlorine species in aqueous solution is presented, against pH. 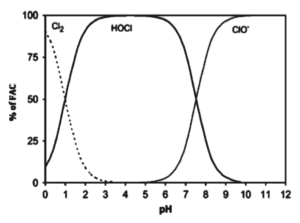 Chlorine disinfection is achieved through oxidation reactions that inactivate the microorganisms present in the water:

When ammonia is present in water, it reacts with free chlorine to form combined species, such as chloramines. As chlorine is added, it reacts successively with ammonia to form three types of amines:

The sum of the concentration of these three species is called combined chlorine.

Chloramines have the advantage that they do not generate strong odors, are more effective in controlling bacterial films on pipes, and are generally stable. It should be taken into account that chloramines can be consumed by biological nitrification, especially in hot temperatures and when ammonia is used in excess.

It is the amount of chlorine that must be added to: (1) react all easily oxidizable substances, such as Fe (II), Mn (II) and H2S. These reactions usually happen in fractions of a second. (2) As chlorine continues to be added, it reacts with ammonia and organic matter present, to form organochlorine compounds, such as chloramines. These compounds also perform a disinfecting action, although more slowly. (3) If chlorine continues to be added, it will react with the previously formed chloramines. The point where the oxidation of chloramines ends is called the breakpoint of chlorine. (4) Once the breaking point is reached, the chlorine added later will increase the concentration of free chlorine directly proportionally. This process can be seen in Figure 2.

In short, enough chlorine must be added to oxidize organic and inorganic matter until it reaches its breaking point, plus the amount of free chlorine that is desired as a residual from disinfection. For drinking water, the aim is to be between 0.5 and 1.5 mg / L of residual free chlorine. 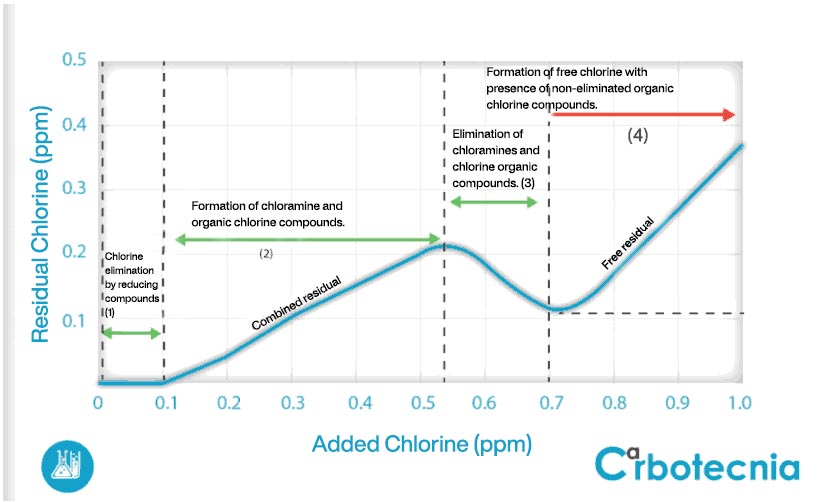 The chlorine dose must be sufficient to satisfy the demand for chlorine and maintain a residual chlorine sufficient to inactivate or eliminate pathogenic organisms. Various physical properties of water affect the efficiency of disinfection. One is the temperature, since the viscosity of the water decreases with increasing temperature, this accelerates the diffusion process. Another is the pH, in pH less than 7.5 we obtain better results, because it increases the proportion of hypochlorous acid in relation to the hypochlorite ion, as we saw previously, the first one is more effective. Turbidity is another parameter that affects disinfection, because pathogenic organisms are encapsulated within the suspended matter that generates turbidity, this outer layer protects them from the action of chlorine. To effectively disinfect cloudy water, it is necessary to increase the dose of chlorine, prolong the contact time with pathogens, or both.

BACK TO BASICS GUIDE to disinfection with chlorine. James A. Olson, 1991, AWWA.