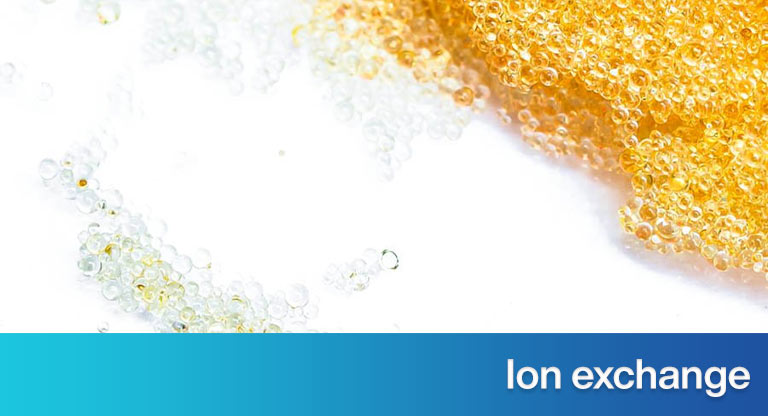 The ionic exchange is carried out by means of a polymer in the form of tiny spheres that are capable of exchanging particular ions for other ions, in a solution that passes through them. These synthetic gel spheres are called “Ion Exchange Resins”. This exchange capacity is also observed in various natural systems, such as soils and living cells. Synthetic resins are not only used for water purification, but also for various other applications that include the separation of some elements.

In water purification, the main goal is to soften the water or remove the mineral content. The water is softened by the use of a resin that contains sodium cations (Na+), and exchanges them for calcium Ca2+ and magnesium Mg2+ (hardness).

As the water passes through the resin, Ca uptake increases2+ and Mg2+ until the resin is saturated, at this point it is necessary to regenerate the resin, charging it again with Na+.

The processes that use ion exchange are the following:

Resin types are often abbreviated as:

The SAC resin is regenerated with a strong acid (HCl or H2SO4).

And the resin is regenerated SBA with a strong alkali (NaOH or KOH).

The cationic resins are regenerated with a strong acid, preferably hydrochloric acid HCl, H2SO4, because it can precipitate calcium.

The anionic resins are regenerated with caustic soda.

Regeneration of the demineralization line

The quality obtained is the same as in the simple SAC-SBA arrangement, but because the weak resins are practically regenerated accordingly, the consumption of regenerating is considerably lower. Also, weak resins have an ability to perform better than strong resins, so the total volume of ion exchange resins is reduced.

Water for high pressure boilers in fossil and nuclear powered power plants and other industries.

The rinse water is used in the production of computer chips and other electronic devices.

Natural water contains calcium and magnesium ions that form salts that are not very soluble in the presence of alkalinity. These cations are collectively called hardness. When the water evaporates even a little, these cations precipitate. This is what happens when you let the water evaporate by boiling it on the kitchen stove.

Hard water also forms scale in water pipes and boilers, both domestic and industrial. It can create cloudiness in the making of beers and soft drinks. Calcium salts form deposits in kitchen glasses, leaving dry skin and damaged hair.

Strong acid catatonic exchange resins, which are used in the sodium form, remove these cations from the hardness of the water and are called softeners, and when saturated with hardness, they are regenerated with sodium chloride (NaCl).

The next reaction represents the resin, which is initially in the sodium form. The reaction for magnesium is identical.

The above reaction is an equilibrium. It can be reversed by increasing the sodium concentration on the right side. This is done with NaCl.

Some examples of the use of softeners:

Note.- Softening the water does not reduce its salinity. It only removes the hardness ions and replaces them with sodium.

This particular process uses a weak acid cationic resin. This type of resins have the ability to eliminate the hardness of water through alkalinity. After treatment, the water contains carbon dioxide, which can be removed with a disqualifying bed. The cationic resin is regenerated very efficiently with an acid, usually hydrochloric.

The next reaction represents the resin, which is initially in the hydrogen form. The reaction for magnesium is identical.

The recombination of hydrogen and bicarbonate generate water and carbon dioxide, the latter is removed with degassing to produce decarbonated water and degassed water.

The applications are of the dealkalination are:

Note.- Dealkalization reduces the salinity of the water, by eliminating hardness cations and bicarbonate anions.

Removal of all cations is seldom used except as a first step in the demineralization process. For this process, a strong acid cation exchange resin (SAC) in the H form is used.+.

Here is the example of sodium, but all cations react in the same way:

The equilibrium reaction is reversed for regeneration by increasing the right-hand hydrogen concentration. This is done with a strong acid (HCl or H2SO4).

For many applications, most of the ions in the water must be removed. In particular, when water is heated to produce steam, as it can precipitate and cause equipment damage. Since there are cations and anions in water, we must use two different types of resins: a cation exchanger and an anion exchanger. This combined arrangement produces demineralized water. The cationic resin is used in the form of hydrogen (H+) and the anionic resin in the hydroxyl form (OH–), so the cation resin must be regenerated with an acid and the anion resin with an alkali.

A degasser can be used to remove the carbon dioxide that is created after cation exchange when the water contains a significant concentration of bicarbonate.

The cation resin must be placed before the anion resin. If the water contains any hardness ions, it could precipitate in the alkaline medium created by the resin anionic form OH– forming Ca (OH)2 and / or CaCO3.

The first step is decationization:

In the second stage, all the anions are removed with the strong base resin:

The weak acids created after cation exchange, which are carbonic acid and silicic acid (H2CO3 and H2SiO3) are removed in the same way:

And finally, the H ions+ generated in the first stage react with the OH ions of the second stage to produce new water molecules. This reaction is irreversible:

Demineralized water is completely ion-free, except for a few residual traces of sodium and silica, because SAC and SBA resins have their lowest selectivity for these. With a simple demineralization line regenerated in reverse flow, the treated water has a conductivity of only about 1 µS / cm, and a silica residue between 5 and 50 g / l depending on the silica concentration in the feed and in regeneration conditions.

Note that the pH value should not be used as a process control, as it is impossible to measure the pH of a water with less than say 5 µS / cm of conductivity.

Because weak acid resins offer a high performance capacity and are very easy to regenerate, they are used in combination with strong acid resins in industrial plants. The first step with WAC resin is deakalination (removal of bicarbonate hardness), and the second step with SAC removes all remaining cations. A WAC resin is used when hardness and alkalinity are present in large relative concentrations in the feed water.

In the last step, an SBA resin is therefore necessary to remove weak acids, as shown in the previous section:

What are the characteristics of a mixed bed? 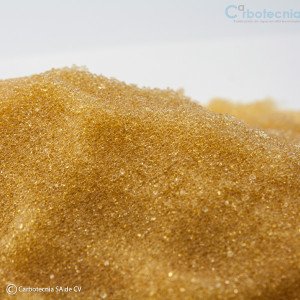 Mixed resins (cationic and aniconic) are commonly used after a demineralization process by ion exchange or reverse osmosis, as a polishing system. They have a preference for silica, where strong acid cation and strong base anion resins are mixed.

Mixed bed units deliver high quality treated water, but their regeneration is complicated, because the resins must be separated to regenerate them. In addition, large amounts of chemicals are required, and the hydraulic conditions for regeneration are difficult to handle. Therefore, mixed beds are only used to treat pre-demineralized water.

The mixed polishing bed produces water with less than 0.1 µS / cm conductivity. With a sophisticated design and appropriate resins, it is possible to reach the lowest conductivity recorded (0.055 µS / cm). Residual silica values can be as high as 1 g / l.

Note that some potentiometers are not capable of operating at less than 1 µS / cm of conductivity.

Nitrates can be selectively removed from drinking water using strong anion resins in the chlorine cycle, ie regenerated with a NaCl brine. The reaction is:

It is mainly used for drinking water and waste. Many of these applications require special resins.

Some contaminants are difficult to remove with ion exchange, due to poor selectivity of the resins. Examples: As, F, Li.