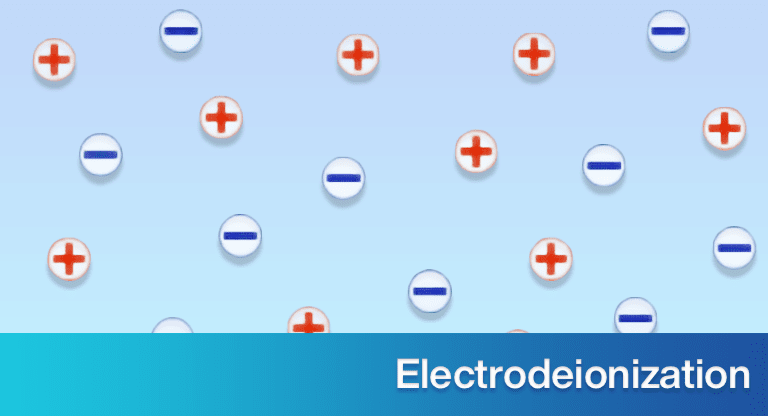 What is Electrodeionization (EDI)?

In combination with reverse osmosis (RO), EDI as the final stage, allows to obtain deionized water with a concentration of salts much lower than that produced by RO. With this system, the mixed resins that have been used up to now are replaced. This means substituting the chemicals required to regenerate resins with electrical current that EDI uses.

How does electrodeionization work?

The water is fed into chambers that contain the resin, which are delimited by selective membranes, anionic at one end and cationic at the other. At the same time that the water is fed into these chambers, an external current source supplies a continuous electric field through electrodes placed at the ends.

The resins retain the cations and anions present, and simultaneously release H+ and OH–. The resins do not act as a store of ions, but as a conductor of the same. As part of the cycle, the resins are regenerated, and the released cations and anions pass through the membranes and move towards the anode or cathode, as appropriate; on their way, a stream of rejection drags them along.

Ion-selective membranes are made of inert polymers and have the same operating mechanism as ion exchange resins. They only allow the passage of anions or cations depending on the case, and they are impervious to water.

1. Pretreatment, followed by an RO step and as a final stage an EDI module. Rejection of dissolved ions in the product water: up to 99.9%.

2. Pretreatment, followed by two consecutive RO steps, and as a final stage, an EDI module. Rejection of dissolved ions in the product water: up to 99.99%.

One possible modification to the previous two is to incorporate a second EDI step that increases the percentage of dissolved ion rejection. Another is the recirculation of the rejection flow from the EDI (or both EDIs) to the RO feed.

Currently, EDI is the most competitive alternative for any application requiring water with a low salt concentration (Resistivity of 1-18 MΩ/cm).

To mention a few examples: