The belief that low salt water is harmful.

It goes without saying that this document is not a report that has undergone scientific rigor. However, it is the result of an honest search to answer the question that entitles it.

We have been based on the possibility that we all have to follow reasonable, analytical thinking that considers advances in knowledge and the evidence to which we have access. Ultimately, this is scientific thinking.

The search took us many years due to the diversity of positions on the subject.

What is the difference between dissolved salts and dissolved minerals in drinking water?

Both terms are synonymous. These are inorganic compounds. Most of them dissociate when dissolving in water. Those that dissociate are called electrolytes.

Demineralizing a water is the same as reducing the concentration of dissolved salts in it.

Why do most of those who study careers related to chemistry have the idea that drinking demineralized water is harmful?

Students of such careers have always been warned not to drink demineralized water used in the laboratory. They have been given various reasons not to: that it causes diarrhea; that steals minerals from the body; which causes heartburn, cell swelling …

Considering that demineralized water for laboratory use has been significantly more expensive than drinking water, the warning has paid off.

When did low-salt bottled waters appear massively on the market?

For many years some brands of bottled water that came from rain or thaw were sold. Because this is the source, its mineral content was very low. However, their market was not large and they did not attract much attention.

In the 1990s, Coca-Cola, Pepsi, and other large companies (such as Danone) began to sell bottled water, and the product they offered was low-salt water. 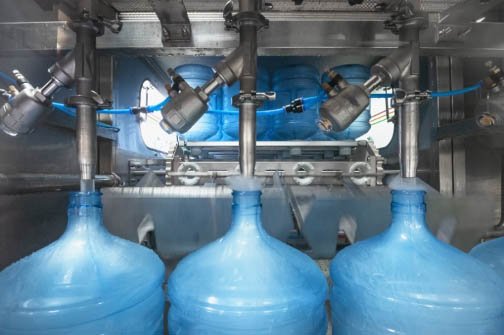 Why did these international companies offer low salt bottled water?

Being international companies, the flavor had to be standardized.

It is not true that water is tasteless. Two fully potable waters can differ greatly in taste, and this depends on the type and concentration of salts dissolved in each.

In the case of the large companies mentioned, they achieved flavor standardization by reducing the content of dissolved salts in the water.

What technology did these companies use to reduce the concentration of dissolved salts in the water?

They used reverse osmosis, a process that appeared in 1953, and that had been greatly improved in recent years.

They could have demineralized the water by distillation or ion exchange, but reverse osmosis had become the most economically competitive method. 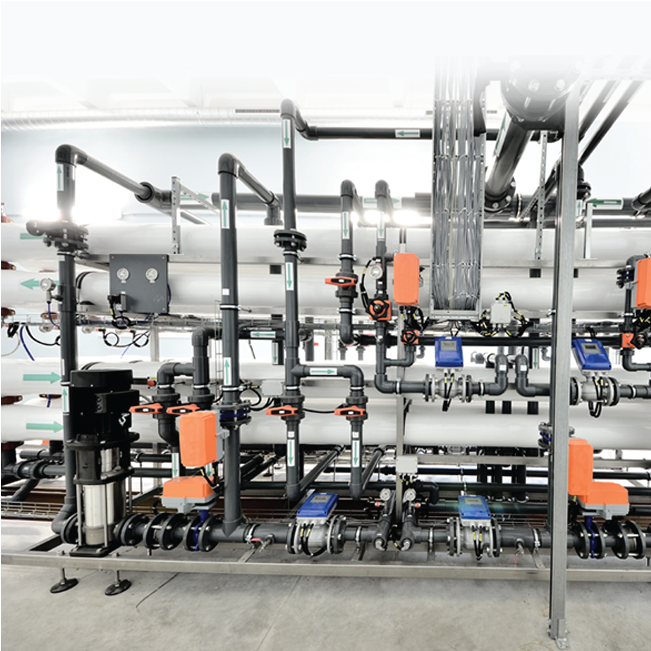 What was the concentration of salts in the bottled water they offered?

The concentration of dissolved salts in water is measured by means of the parameter called Total dissolved solids (SDT). The first brands that these companies offered in the Mexican market had TDS of 70 mg / L.

A reverse osmosis equipment produces osmotized water with TDS of around 10 mg / L. Therefore, to achieve 70 mg / L, osmotized water had to be mixed with water raw (without osmotizing) in the appropriate proportions (Note: it is common for water from lakes, rivers and wells to have TDS between 100 and 400 mg / L).

What did the smaller bottlers do?

Soon enough, the smaller water bottlers followed the same steps as the big ones: they decided to osmotize the water.

They did so, because the population began to associate the taste of low-salt waters with the idea that they were drinkable. This is wrong, as drinking water can contain many different concentrations of TDS, but it was a reality that was difficult to resist.

Why did many companies lower the salt content in bottled water even more?

Some of the small companies, due to ignorance, bottled the water obtained directly from the osmosis equipment, with TDS between 5 and 10 mg / L.

If the low salt water had been harmful, many of its customers would have suffered health damage, but it was not. In fact, some of the international companies began to sell their bottled water with similarly low TDS.

Considering that a low salt water is not harmful, can it have any advantage or any property that favors health? 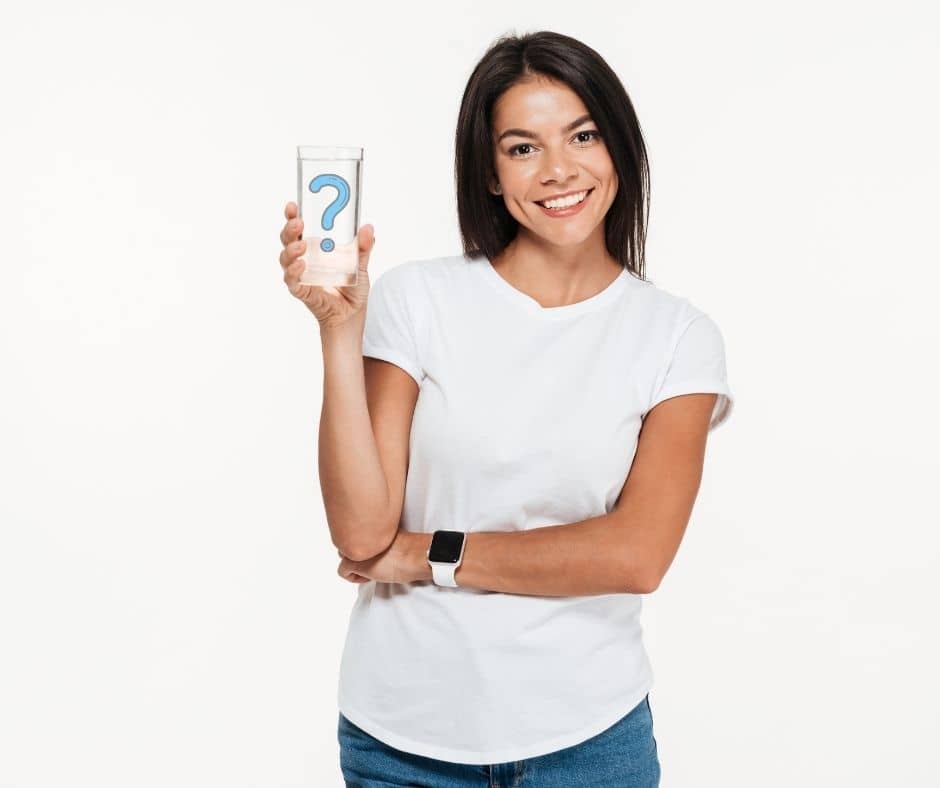 The only advantage that a fully osmosis water has is that the compounds or microorganisms that could cause damage to health do not pass through the reverse osmosis membranes.

A company that does not osmotize all the water it bottles (because it mixes raw water with osmotized water to obtain a product with a not so low TDS content) can produce perfectly drinkable water, but it will have a greater challenge in guaranteeing the absence of compounds. contaminants or microorganisms in raw water.

Why do so many publications appear on the internet that warn about the harmfulness of low-salt bottled water?

The Internet is not a platform that facilitates or guarantees finding valid scientific knowledge. Anyone publishes whatever it is and this makes it a battlefield of claims whose criteria are not always scientific and ethical.

To have access to knowledge, you have to go to the right sources. One of them is in scientific publications. Another may be the opinion of the health authorities. And another is the analysis of the facts from common sense or reasonableness.

What do scientific publications and health authorities say about the consumption of low-salt water?

There is no shortage of scientific publications related to the effects that low-salt drinking water can have on health, but there has been no force in favor or against this type of water.

The World Health Organization (WHO) has pointed out the importance of minerals in nutrition, but mentions that they should not necessarily come from the water that is drunk.

Neither the WHO nor the health authorities of more developed countries (such as the US FDA) have issued alerts or prohibitions regarding the consumption of low-salt water. Of all this, the potability standards do not establish minimum limits for TDS.

In fact, many brands of purifying equipment are currently marketed that are installed in kitchens or drinking water dispensers, which osmotize all of the water they deliver.

What can common sense say about low salt water as a drink?

An indirect argument (it has nothing to do with chemical or physiological reasons) and of great weight, is that many human groups drink water that comes exclusively from rain or snowmelt. The content of TDS in the water from these sources is the same or even lower than that of an osmotic water. These groups do not have a lower life expectancy or any morbidity or mortality that has been associated with the water they drink.

Another argument that reinforces the previous one is that the low-salt water that has been sold in bulk for more than two decades has not been a cause of any damage that has been registered. Companies like Coca and Pepsi have plenty of resources to research what they offer and to avoid putting your company at risk.

Some will not value this statement. Perhaps they will point out that the soft drinks that Coca and Pepsi have sold have caused damage to health. However, this cannot be considered a final judgment. In fact, in a strict sense, soft drinks are considered food and have served a mission as such. The damage that soft drinks have caused lies in the amount that each individual consumes. Nor can refined sugar be blamed. From a logistical point of view, it has been essential in urban life in large cities. It would be complex to have only unrefined flour and sugars; they would ferment in a short time.

What can be said from the point of view of the physiology of the water balance that occurs in the cells of the body?

Most cell membranes are permeable to water. Osmotic forces drive water into or out of cells to maintain osmotic balance. Although the composition of intracellular fluid is very different from that of extracellular fluid (which is plasma or interstitial fluid), both have the same osmolality; that is, the same total concentration of solutes, which is around 9 grams per liter.

2. When a person drinks water, it first passes through the stomach and mixes with gastric juices. It is then absorbed through the small and large intestines, and mixes with blood plasma. When it reaches the cells, it is already in an isotonic concentration.

In other words, (a) a low-salt drinking water is practically as hypotonic as a high-salt one; and (b) both reach the cells after being mixed with the gastric juices and with the blood plasma, in an isotonic concentration.

Can a low salt water cause a lower supply of minerals than the body requires? Or can it cause the lack of certain minerals in particular?

According to what was mentioned in previous paragraphs, as long as the diet is adequate, the communities that drink waters that are very low in salts have not shown a deficiency in any particular mineral.

An analysis of the content of minerals in food shows that they provide a substantially greater amount than the water that a human being drinks daily can provide.

A demineralized water is avid at dissolving compounds; Because of this greed, it absorbs carbon dioxide (CO2) found in the air; and the CO2 forms carbonic acid (H2CO3), which acidifies the water. Can this acidity cause damage to health?

A totally pure water has a pH of 7.0. By dissolving the CO2 from the air, the pH can decrease to values close to 5.5. This value corresponds to a weak acid. It does not compare with the acidity of the stomach, rich in a strong acid, hydrochloric (HCl), which causes a pH of between 1.0 and 3.0.

What can be concluded?

That drinking water low in salts does not cause harm to health.

Official Mexican Standard NOM-127-SSA1-1995, Environmental health, water for human use and consumption-Permissible quality limits and treatments to which water must be subjected for its purification.