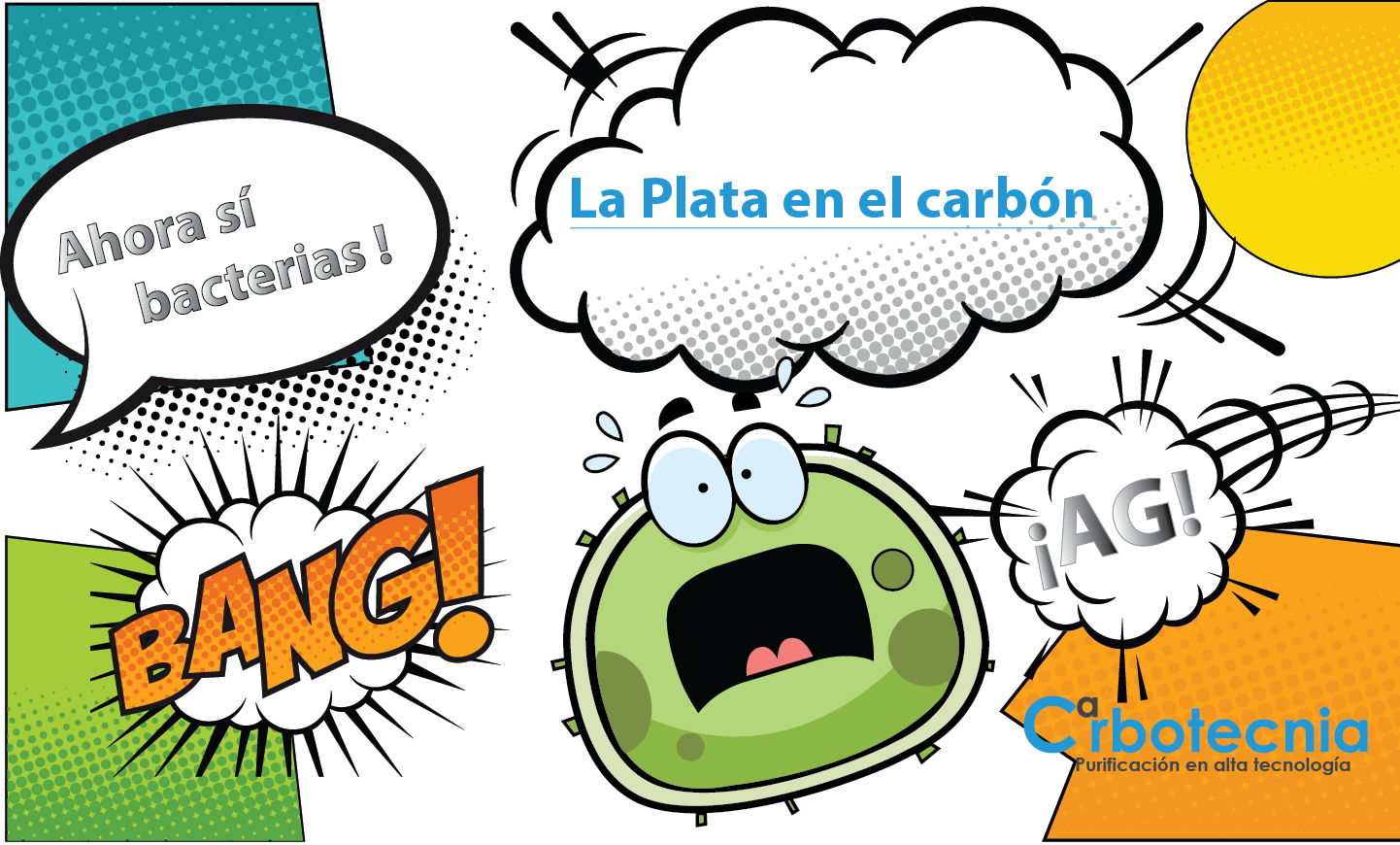 One of the main applications of granular activated carbon is the purification of water. Its function is the retention of organic contaminants and the elimination, by chemical reaction, of the free residual chlorine that remains in the water after the disinfection stage.

The elimination of free chlorine is carried out in the first centimeters of the carbon bed, so that in the rest of it, there is no protection against the development bacterial. Sooner or later, bacteria that come from a poorly disinfected influent, or from some point in the effluent pipeline, can have an impact. This happens, mainly when the water is not circulating, while the equipment is out of service. The bacteria are reproduced, and they turn the coal bed into a source of contamination.

In order to inhibit bacterial growth, the surface of the carbon is impregnated with metallic silver. The resulting carbon is called bacteriostatic.

And its effects on health?

Silver has negative effects on men, only in very high doses. In cases of chronic ingestion of this metal (daily average ingestion dose of 0.14 μg per kg of body weight, for 70 years) it can cause argyria, which consists of an irreversible, grayish-blue coloration of the skin. This effect does not alter any functional organ, and is therefore considered a cosmetic defect.

No mutagenic or carcinogenic effects have been found, and therefore silver has not been classified as a carcinogen.

Originally, the World Health Organization recommended that drinking water contain no more than 0.05 parts per million of this element. The legislation of various countries, in

health matters, set this value as the maximum allowable for drinking water. Currently, due to the evidence of its relative safety, the maximum permissible limits have become more lax, and for example, in the United States and Mexico, this value is 0.1 mg / liter.

In order to comply with the drinking water standards, it is important that the silver impregnated in activated carbon is sufficiently well bound to it, to avoid its release into the water. Said detachment, in addition to causing non-compliance with the standard, means that the carbon will lose its bacteriostatic protection in less time.

Not all methods of impregnation of silver into activated carbon achieve good fixation of this metal. There are basically three know methods: colloidal silver, chemical and electrochemical.

The colloidal silver method consists of preparing a solution in which silver is found as a colloid. A colloid is a physical state that is at the boundary between a suspended and a dissolved solid. The colloidal silver solution has the appearance of a silver paint. With it the activated carbon is bathed, so that the silver is applied as a layer of paint.

Unfortunately, the silver is not sufficiently fixed, and therefore it is easily dislodged into the water.

* Therefore, in the United States the method of impregnation with colloidal silver has been declared unacceptable.

The chemical impregnation method consists of a reaction between ionic silver dissolved in an aqueous solution and carbon subjected to pre-oxidation. It is a high-temperature reduction reaction in which silver is chemically bonded to carbon.

Good fixation is achieved with the chemical impregnation method, which is why it is allowed both in the United States and in Europe and Japan. However, there is always a small proportion of silver that is released into the treated water. Therefore, the char remains bacteriostatic for a relatively short period of time.

Finally, the electrochemical method consists of the deposit of silver on the surface of the carbon by means of an electric current that causes the reduction of silver. This method achieves a much better metal-to-carbon fixation and is therefore considered the most acceptable method.

DIFFERENCE BETWEEN A BACTERICIDE AND A BACTERIOSTATIC AGENT

A bactericidal agent is one that is applied in a fluid in order to kill the bacteria contained in it. Examples of bactericidal agents for the purification of water are chlorine, iodine, ozone, chlorine dioxide, chloramines and silver ions. The latter are dosed by electrolysis, from a silver anode, in which an electric current causes the oxidation of the metal, which is released into the water in its ionic state (Ag+).

In contrast, a bacteriostatic agent is not dosed into the fluid, but remains fixed in the solid. Therefore, silver impregnated carbon is bacteriostatic but not bactericidal. In other words, it fulfills the function of inhibiting bacterial growth on its surface, but it does not guarantee the annihilation of microorganisms in the event that they are carried by water in relatively high concentrations.

The fixation of silver by means of chemical and electrochemical methods is not simple due to the difficulty with which it can be detached from the carbon surface to be extracted into a liquid in which its concentration can be analyzed.

To achieve a good analysis, a double extraction is necessary: first, with a solution of nitric acid, at reflux. Secondly, with ammonium hydroxide solution, also at reflux.