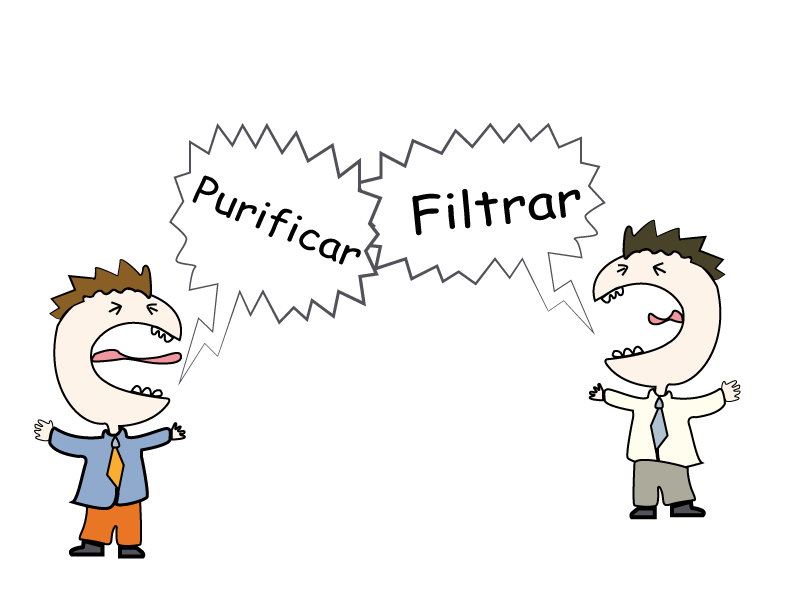 It may seem quite simple what the difference between these two terms is, but in reality they are very often misleading. For this reason we will touch on this topic and thus we will know how to differentiate between one and the other, and when they are used.

Filter
Filtering means 'retaining suspended solids in a fluid', this can be air, water or some other fluid. And by suspended solid we must understand how everything that is not dissolved in water, since when a solid dissolves in water it is considered a liquid.

Dissolved what?
Yes, let's imagine we have a cup of coffee, it has happened to more than one or another sweet tooth addict that puts one, two, three and even four! tablespoons of sugar. The sugar in the first two tablespoons dissolves without problem. The next two will no longer do it, because depending on the solid compound, it is its solubility (that of the salt is 24% in water for example). These two tablespoons will settle at the bottom of the cup and no matter how much one turns it with the spoon, they will no longer be able to dissolve, and these are what we can call suspended solids.

The problem with when it is filtered is that you depend on the size of the filter mesh (it is measured in microns) depending on what you want to filter is the micron size that you should use.

For viruses and bacteria, which are suspended solids because they are not diluted, filtering the water does not work. Why? because although they are not dissolved in the water. These are tiny, you would need a filter of .2 microns so that they do not pass.

Purify
Since we saw what filtering actually does, we will now talk about what happens when it is purified.

The concept of purifying encompasses filtration but also more processes to remove other contaminants. Let's say the first step for purification is filtration. But if your filter is .10 or .5 microns, guess what? Bacteria and viruses calmly pass through the filter. But don't worry, in the purification processes this is already planned. Another step known as disinfection is added, where bacteria are disabled.

What you do is place an ultraviolet light or a very closed mesh where bacteria and viruses no longer pass, or add a chemical such as chlorine or ozone. And the champion of champions of purification is Reverse Osmosis.
Reverse Osmosis combines different steps to obtain the cleanest possible water. It has such a small mesh that not even dilute minerals pass through the water. It has activated carbon cartridges so that chlorine and organic matter do not pass, and a sediment cartridge. Both are for the protection of the osmosis membrane, which has such a tiny micron size that if it did not have this protection, it would be destroyed or saturated in a matter of minutes.

This is the difference between filtering and purifying and the big problem is believing that 'if I buy a filter, the water already becomes drinkable'.