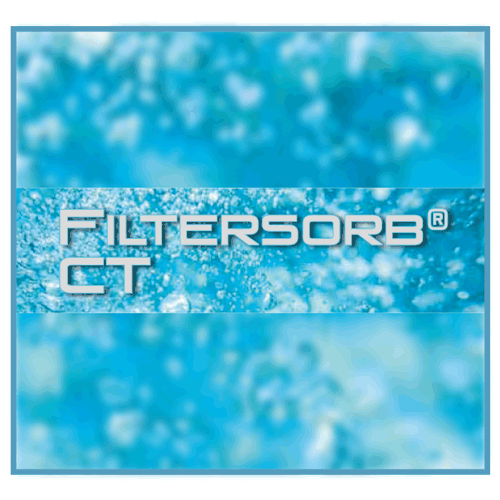 Filtersorb CT – Catalyst for the prevention of anion and cation incrustations

Filtersorb CT is a filter media developed to optimally prevent scale and scale build-up in pipes.

Filtersorb CT is a combined technology between Filtersorb SP3 and Filtersorb SPA that results in high efficiency and provides additional capacity to treatment systems.

Filtersorb CT is a combination of nucleation with an exothermic process which is the best way to remove both anions and cations in hard water providing a safe anti-fouling treatment 100 times more powerful.

The nucleating component in Filtersorb CT is Filtersorb SP3, which works through a nucleation process in which the medium adsorbs cations from its surroundings forming crystals and releasing CO2 in colloidal form and separates a gas molecule.

Filtersorb SPA is responsible for the exothermic process in which the medium separates negatively charged anions from positively charged cations in the form of ionic bonds on the surface, called EXO (outside), from beads with a very strong positive charge.

Scale, corrosion and biological growth are related to each other.

Permanent hardness precipitation can be inhibited only with carbonate or there can be no corrosion if the alkalinity of the water is 8 to 8.5.

The two types of Filtersorb units are SP3 for scale prevention and SPA for the prevention of scale caused by anions. SP3 prevents cationic scaling based on positively charged ions such as calcium and magnesium which are converted by nucleation into CaCO3 crystals. SPA prevents fouling based on negatively charged ions such as sulfates, silicates and phosphates (calcium phosphate).

Filtersorb CT is a mixed medium that prevents cation and anion scaling, both positively and negatively charged ions. Systems made with Filtersorb CT do not require any regeneration, chemical addition, or electric valves, nor do they generate waste water. Filtersorb CT is a continuous upflow system.

Filtersorb CT can treat systems of both:

These systems will reduce calcium, magnesium, sulfate and silicate scale including phosphates.

Treatment of total hardness of cations and anions

There are no reviews yet.