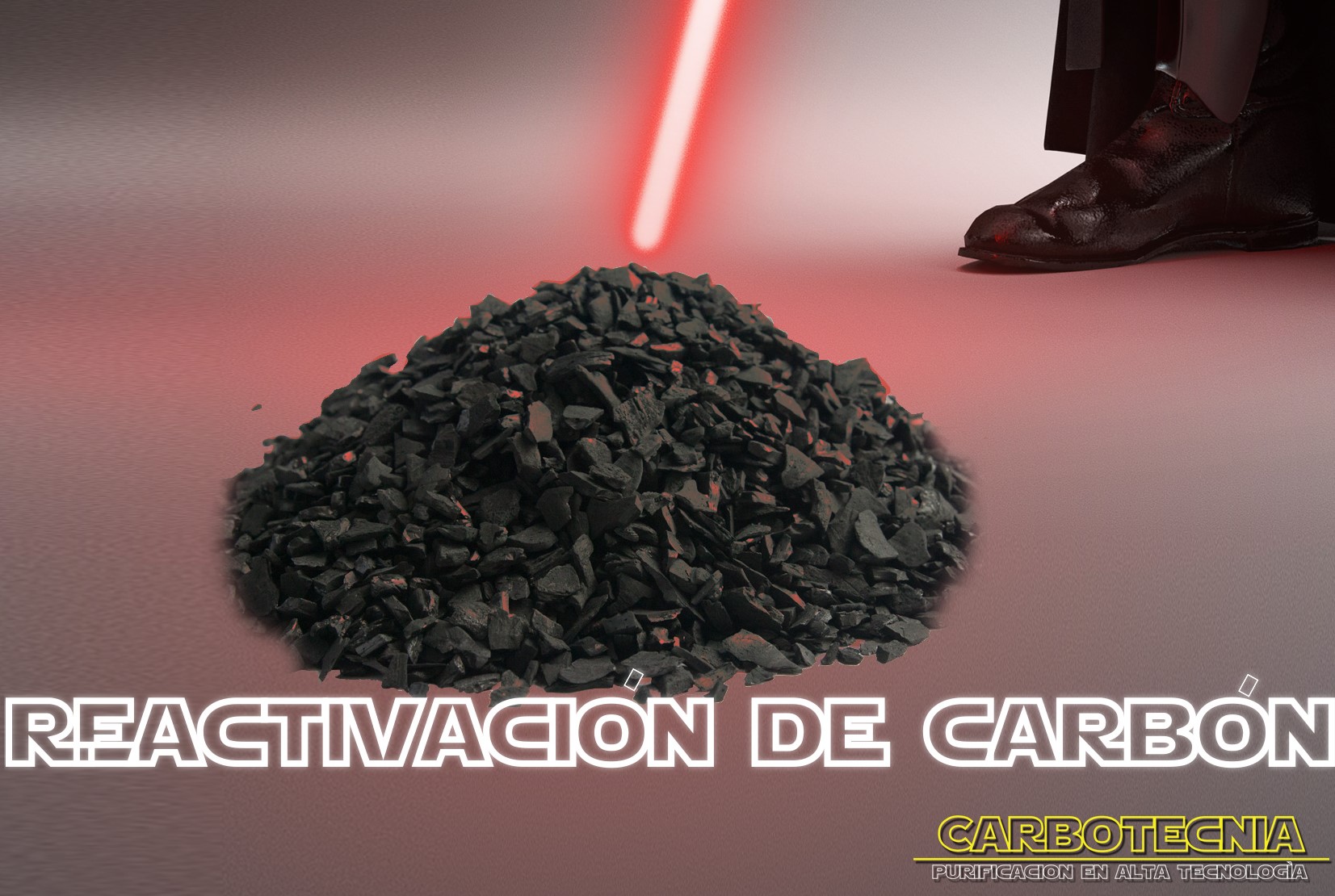 The Dark Side of Carbon - Reactivation of Coals

As we already know, the main means of retaining organic pollutants on the surface of Granular Activated Carbon (AGC) is physical adsorption and, as such, it is reversible. The adsorption theory indicates that by changing the conditions in which the carbon is found, the desorption or detachment of the retained adsorbates can be achieved, leaving their surface free.

Desorption, however, can be very slow and may not restore all or most of the original capacity of the coal. On the other hand, chemisorption involves a chemical reaction, so that the molecules retained by this other mechanism are released with completely different molecular structures from those that the adsorbate originally had; finally, there are inorganic molecules that have not been adsorbed but that do precipitate and are deposited on the surface of the carbon and whose elimination will not respond to the methods of desorption of physically adsorbed molecules either.

Fortunately, the graphitic structure of CA makes this solid very stable under very different conditions. It resists high temperatures, as well as sudden changes in it, it is not affected by acids, alkalis or many different solvents, although it reacts with strong oxidants. Based on these properties, there are methods called reactivation or regeneration, with which adsorbates of various kinds and organic and inorganic substances deposited on the surface of the coal can be removed. Depending on the adsorbate or contaminant in question, the appropriate method will have to be chosen.

A CA that is removed from the process in which it was used is called spent carbon, regardless of whether it is discarded or is to be reactivated. When a CAG is going to be reactivated, it is convenient that its support system be made of nozzles and not of gravel or sand beds, to prevent the carbon from mixing with a certain amount of particles of said materials. The harder a carbon is, the less percentage of it is lost throughout the reactivation cycle, since it better resists the mechanical stresses to which it is subjected, starting with its handling and transport.

Next we will talk a little about the different methods to reactivate the charcoal.

It consists of circulating water vapor through the carbon bed, without allowing it to condense as in the case of steam sanitization. In this way organic molecules are desorbed with a volatility less than or approximately equal to that of water - that is, with a boiling temperature of less than 100 ° C - at sea level - and which had been retained by physical adsorption. It is a widely used method to recover solvents from coals that have adsorbed them from a stream of air, since the detached molecules maintain their original structure. As mentioned in section 1.7, coal undergoes alternating adsorption-desorption cycles. In the first, the solvent is retained until the carbon becomes saturated; in the second, the solvent is desorbed and the mixture of this and the water vapor is separated by decantation or distillation. In the case of water treatment, steam reactivation can be practical when the pollutant basically consists of odor or low molecular weight compounds and is therefore volatile. It is not an effective method for the case of coal that has been used to dechlorinate, since most of the surface oxides generated in this process are strongly bound. The higher the pressure of the steam used, the higher its temperature and therefore it will be able to desorb heavier compounds. The maximum pressure at which steam is handled in a practical way is 8 Kg / cm2 (absolute, which corresponds to a temperature of about 170 C.

It is the same as the previous one, but combustion gases are used. In the case of some scientific studies at the laboratory level, in which it is required to reactivate without the interference of an oxidizing gas, the desorption is carried out by means of an inert gas that is heated indirectly. A faster or more efficient result can also be achieved by vacuum.

It is the most widely used method, since it eliminates practically all the organic pollutants retained by physical or chemical adsorption. It also removes some inorganic compounds and destroys oxides and surface groups. Therefore, it reactivates carbons used in dechlorination or in the elimination of chloramines, potassium permanganate, ozone and other oxidizing agents. This method deserves a special section so we will talk in another post in more detail about this type of reactivation.

When charcoal particles are white to light gray in color, they are most likely poisoned or blocked with carbonate or calcium hydroxide. In these cases, thermal reactivation fails to eliminate said asuns; instead, a wash in an acidic solution does. Any type of strong acid can be used, but hydrochloric is the most common. The solution of about 5 percent by weight is prepared and the coal is flooded in it. The dissolution process of calcium salts is slow. The exact time varies depending on how steeped the charcoal is, but can be anywhere from 10 to 40 hours. To achieve greater speed, the solution is heated to 60-70 ° C and the process is kept under stirring. With this the time can be reduced.

Once the reactivation is complete, the charcoal should have recovered its black color. This is not noticeable while the charcoal is wet, so a small sample should be taken and dried with a lighter or lighter.

When the retention capacity of a specific adsorbate depends on the pH value, this condition can be used to desorb it, thus regenerating the carbon. For example, phenol adsorbs in relatively high amounts at low pH values and the opposite occurs at high pH values. Thus, if the CAG saturated with this compound is washed with a 4 % solution of soda, it is possible to dissolve a good percentage of it.

This method is only applicable in very specific processes where the carbon has adsorbed a single compound, such as phenol.

The biological reactivation of CA occurs in water treatment, since, as has been described, the bacteria that develop on the surface of the coal feed on the adsorbed biodegradable matter. This benefit can also be achieved in CA once it has been removed from the adsorption process. To achieve this, the charcoal is placed in a column through which an aerated and nutrient-rich solution is recirculated, initially as an expanded bed.

This method has found application in the field of wastewater treatment, achieving 80 percent regeneration in 96 hours; however, so far its use is not frequent.

As its name indicates, it is a modality of thermal reactivation in which, at atmospheric pressure, they would undergo pyrolysis before desorbing. This seeks to recover the adsorbate and prevent its destruction. This process is very rarely applied on an industrial scale, due to the cost of vacuum. However, it is frequently used in laboratory scale studies.

For any questions or clarification, you can write us below this Post. At Carbotecnia we have more than 10 years of experience in the reactivation of coals, and we will gladly assist you.

Call:
Online chat
Start chat
We will reply to you as soon as possible.
Click below to send a whatsapp
Reception
Hello! How can I help you?
We will be back soon 1:16