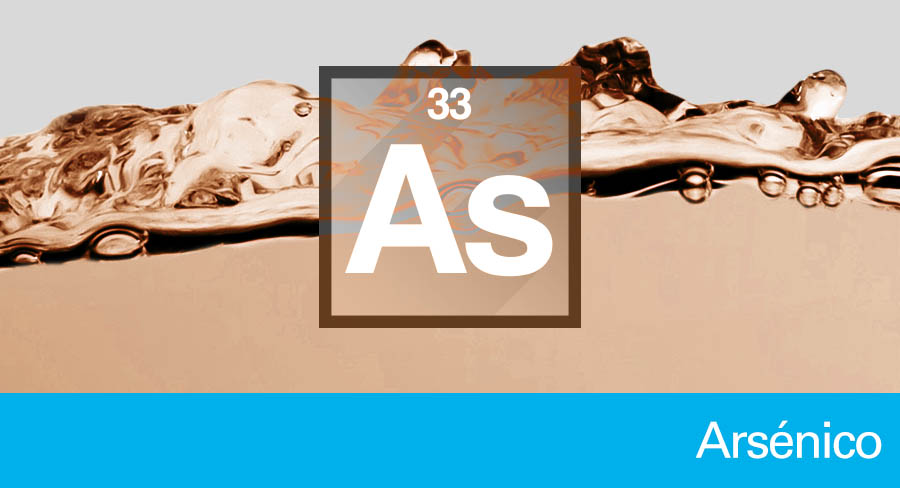 Arsenic is a chemical element whose symbol is As , it is crystalline and semi-metallic silver-white ace.
Atomic weight 74.922 g / mol.
Atomic number 33.

It's odorless and tasteless. It enters the drinking water from natural reservoirs on the land, or from agricultural and industrial practices.

Non-cancerous effects may include skin thickening and discoloration, stomach pain, nausea, vomiting, diarrhea, numbness in the hands and feet, partial paralysis, and blindness. Arsenic has been linked to cancer of the bladder, lungs, skin, kidneys, nasal passages, liver, and prostate.

Inorganic arsenite (arsenic (III)) in drinking water has a much higher acute toxicity than organic arsenate (arsenic (V)). The minimum acute lethal dose of the element in adults is estimated at 70 to 200 mg or 1 mg/kg/day.

Chronic poisoning from drinking contaminated well water over a long period of time. Many aquifers contain high concentrations of element salts. The World Health Organization recommends a limit of 0.01 mg / l (10 ppb) of arsenic in drinking water. This recommendation was established based on the detection limit for most equipment testing laboratories at the time of publication of the WHO water quality guidelines. More recent findings show that consumption of water with levels as low as 0.00017 mg / l (0.17ppb) over long periods of time can lead to arsenic poisoning.

One of the worst incidents of arsenic poisoning through water occurred in Bangladesh, an event which the World Health Organization called the "largest mass poisoning of a population in history."

Mining techniques such as hydraulic fracturing can mobilize arsenic in groundwater and aquifers due to enhanced methane transport and resulting changes in redox conditions, and inject the additional arsenic-containing fluid.

What are the methods used to remove arsenic from water?

The EPA has not yet determined the best technology for removing arsenic from water. But some studies have been conducted to reduce arsenic concentrations below levels of 0.20 µg / l.

There are six possible treatments under certain water characteristics that can lower arsenic levels:

The coagulation process involves adding a metal-based coagulant, such as ferric chloride (FeCl3), to water contaminated with arsenic. FeCl3 hydrolyzes in water to form positively charged ferric hydroxide [Fe (OH) 3]. Arsenic must be in oxidized form to be effectively removed [As (V)]. Therefore, if arsenite [As (III)] is present, it may be necessary to oxidize it to As (V) using chlorine. Arsenate [As (V)] is a negatively charged anion and absorbs positively charged Fe (OH) 3 particles or flocs. Sedimentation and filtration processes then remove the arsenic particles.

The activated alumina adsorption process is very sensitive to the pH of water, the highest efficiency is obtained at pH values between 5.5 and 6.0. For this reason, it is necessary to adjust the pH of the water to be treated to a value in the aforementioned range. On the other hand, pollutants such as silica, fluorine, selenium, and sulfates at high concentrations, block the active adsorption sites and cause rapid saturation of alumina, reducing its efficiency with respect to the removal of arsenic. The water produced by this technique has a pH <6.5, so it needs to be re-adjusted with an alkaline reagent.

In the regeneration of activated alumina, the adsorbed arsenic is recovered only between 50 and 70%, therefore the capacity of the adsorbent medium decreases between 5 and 10% in each operating cycle. After a period of use, it is necessary to replace it completely.

Two types of resin are needed in anion exchange, one anionic and the other cationic. These resins also remove sulfates, nitrates, arsenic and regulate the pH of the water. The cost of operation and maintenance is comparatively low when compared to reverse osmosis (RO) or ultrafiltration (UF). However, in the event that there are other compounds such as those mentioned above and only the arsenic needs to be removed, it would not be the best alternative.

In addition to ion exchange, arsenic is also removed with a reverse osmosis system. Reverse osmosis systems can retain up to 99% of total dissolved solids (TDS), including arsenic from water. The pore size of RO is so fine that only water molecules pass through. This system is perfect for the application of drinking water or any other application that requires the most purified form of water, since it eliminates all the contaminants that the water contains, thus making this purification method a more comprehensive solution. In terms of operation, this is one of the simplest and safest systems to operate, since it does not require handling of acids or dangerous chemicals.

It is a purification technique that can remove ionic compounds from liquid solutions using selective permeable membranes in a constant electric field (Guastalli, 2004).

This technique has the ability to remove charged contaminating ions up to 0.0001 µm, by means of porous membranes or sheets of ion exchange resins with a low relative permeability for water. This method, like reverse osmosis, is not selective in only removing arsenic.

You can contact us for a solution to arsenic contamination of water.