The most common granular media used in deep bed filters are silica sand, anthracite and garnet (garnet); the latter is also known as high density sand. The standard B100 of the American Water Works Association (AWWA) provides the sampling, evaluation, properties, packaging and installation requirements for these materials.

The particle size of the granular filter media must be large enough to allow a significant percentage of the suspended solids to be retained to penetrate two to four inches deep into the bed. Rough and angular media form larger voids that allow more fine particles to pass through than a round granular media of the same size.

The closer the uniformity coefficient is to the unit, the greater the uniformity in the size of the particles in the medium. The ideal particle size range of a granular media depends on the size characteristics of the suspended solids to be retained as well as the quality requirements of the filter effluent.

In order to increase the operating time of a filter bed formed by a single granular medium, it is possible to form two or three granular media. The upper one, formed by larger particles, and the lower one, by the smaller particles. In this way, the upper layer only retains the larger suspended solids, and does not become saturated as quickly. These beds are called multi-bed or multi-media. The particle density of the medium placed in the upper part should be the lowest, and that of the medium placed in the lower part should be the highest. In this way, each layer remains in its proper place after backwashing. In these filters, he coefficient of uniformity of each layer should be as low as possible to avoid mixing after backwashing.

What types of filter materials can be put into AWWA deep bed filters?

Tables 1, 2 & 3 list recommendations from different authors for the conformation of multi-bedding.

The function of the diffusers in a filter is to support the filter media, collect and direct the water out of the filter, as well as distribute the water (and air, in rare cases) for backwashing. The appeared on the market in recent years, and are described below.

Previously, water distribution systems consisted of an arrangement of pipes with drill holes. These holes used to have a diameter of ¼" and ½". The perforated pipe was immersed in a layer of gravel whose smaller particles had to be at least twice the size of the perforations. A layer of gravel was placed on top of the perforated pipe, with smaller and smaller particles up to the layer that held the granular filter medium (Figure 3). The guide for selecting size and depth of the gravel support layers for a granular media filter can be found in Appendix D of the AWWA B100-16 standard. 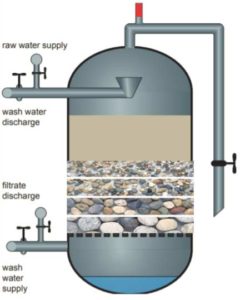 Modern diffusers are micro-slotted systems with a special design (such as the Johnson type slot) that prevent the passage of filter material into the diffuser without the use of gravel. These diffusers can have different shapes.