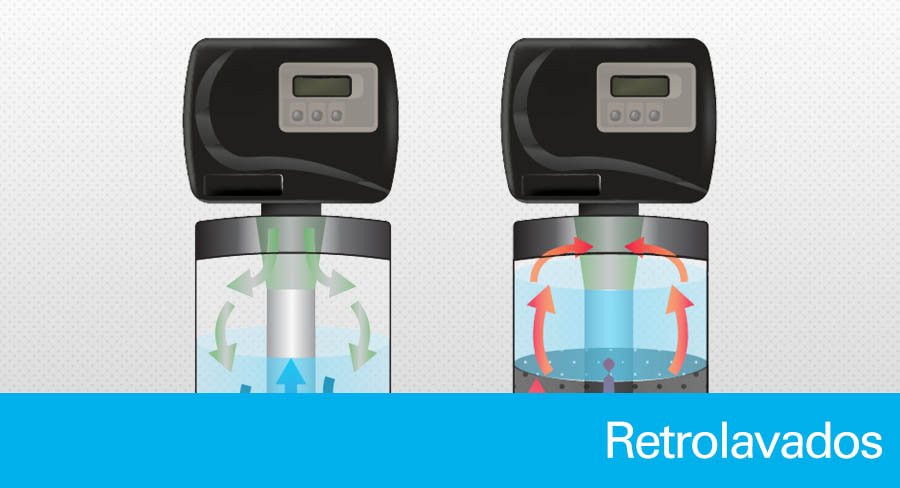 Backwashing is the most important maintenance operation for the correct performance of a bed with a granular medium, which can be activated carbon, sand, zeolite, ion exchange resin... or multimedia beds. There are important reasons, not always detectable to the naked eye, why it is necessary to backwash granular beds. Among them, the main ones can be:

If the bed is not decompacted frequently, there comes a time when the bed petrifies and then breaks, thus causing the flow to be channelled through the cracks. When this happens, the contaminant that was being retained suddenly appears in the effluent, appearing as a premature saturation of the bed. 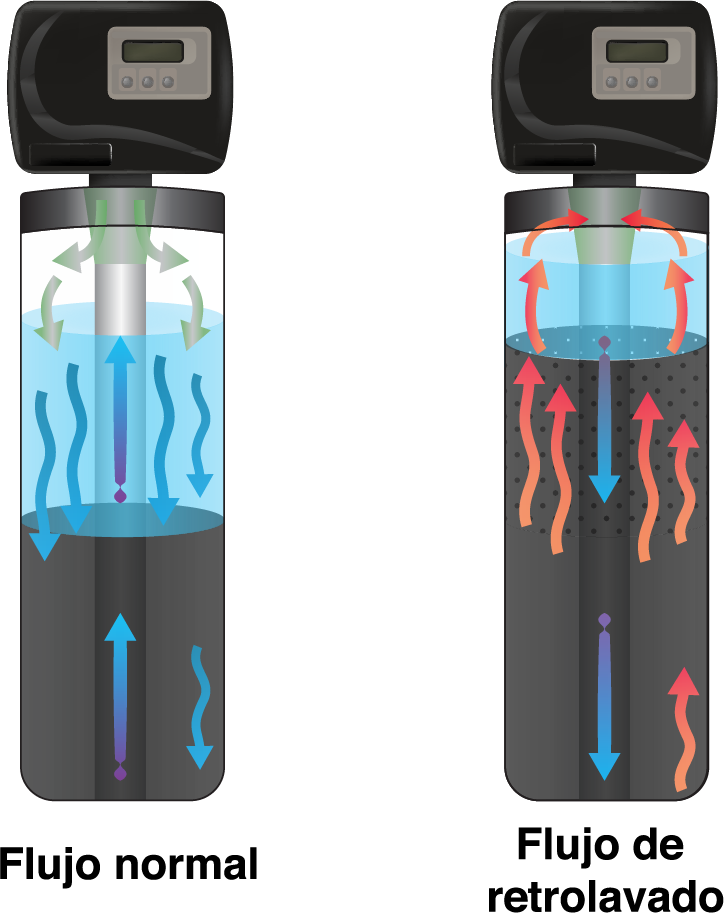 The basic concept of a backwash.

In essence, a good backwash is one in which two things are achieved: expanding the bed by 30 to 40%, and stratifying the carbon particles at the end of the operation. To achieve the former, you need to make sure that the bed expands, and not simply rely on the manufacturer's reported graphs. These graphs give an approximate idea of the flows with which different percentages of expansion are achieved, but a final adjustment must be made for each particular case.

If the above mentioned verification is not done, there is a risk that the bed will not expand, or that the carbon will be dragged out of the adsorber.

When backwashing is done correctly, as the bed expands, the particles move up and down, rubbing against each other, thus achieving a better and faster cleaning of this surface.

To avoid possible losses of the granular medium in the event of excessively strong backwashing, a screen is placed to capture it at the discharge of the line through which the water comes out of this operation and it is monitored to ensure that it does not come out. It is also necessary to observe the water that comes out of the backwash since, when it comes out free of particles and turbidity, the filtering medium has been cleaned (free of the particles that were suspended in the water and were trapped in the carbon bed) and the backwash has done its job. As for stratification, this consists of the larger or denser particles remaining at the bottom of the bed, and the smaller or less dense ones at the top, after backwashing. Stratification is convenient because by maintaining the relative level of carbon particles within the bed, the bed becomes saturated in an orderly manner. With this, the ZTM is maintained and advances little by little. If the particles are not stratified in the case of an activated carbon, the breaking point (point at which the carbon must be changed) is reached sooner. To achieve stratification, the backwash flow must be gradually reduced.

The advantage of higher density activated carbons in the backwash.

Although a higher density carbon requires a higher flow rate to expand, it has the advantage of being cleaned in less time. As a result, although the flow is relatively high, there is a saving of water. For example, a bulk density activated carbon of 0.55 g / cm3, whose particle size range is 8x30, typically requires no more than two minutes to become ready if it is backwashed by expanding it by 30%. On the other hand, a carbon of the same size, but with a density of 0.45 g / cm3, may require up to ten minutes.

How often should I backwash my water treatment systems?

The frequency with which the adsorbers are backflushed is determined based on one of the two following parameters: a maximum allowable pressure drop or a defined time interval.

The first case corresponds to equipment whose bed becomes obstructed relatively quickly. For example: Filter-adsorbers. These are adsorbers that are not preceded by a filter and that treat water with a relevant amount of suspended solids. This is typical in municipal water treatment plants that replace existing filter sand beds with GAC beds. In this way, in addition to filtering the water, some additional contaminants such as odor and taste are retained, and without the need to change the equipment. The particle size of the carbon is not chosen to minimize the backwash requirement, but to obtain an effluent whose turbidity or total suspended solids content meets a specification.
Adsorbers with a strong biological activity, and therefore generate a large amount of biomass.
In the above cases, the smaller the carbon particle size, the faster the
bed becomes clogged. In the case of pressure flow adsorbers, backwashing is usually carried out when the pressure drop reaches 0.5 to 0.7 kg / cm2.

When an adsorber clogs up relatively slowly, the pressure drop is no longer the most suitable signal for the next backwash. It is then necessary to define a period of time between backwashes to avoid bed cementing or excessive bubble entrapment. This is done based on observation and experience. However, at a minimum, backwash should be done once a week.

Procedure to verify the correct expansion of the bed in pressure flow adsorbers with upper register.

This is done only when a new carbon bed is put into operation or at the change of seasons in places where the temperature varies significantly throughout the year.
In the case of newly installed carbon, it is necessary to leave it flooded long enough (at least 24 hours) for most of the air to escape from the pores. Otherwise, the carbon will be dragged upwards with even a small backwash flow. The backwash flow should be started gradually, until the required expansion of 30 to 40% is reached. In pressurized flow equipment, which have a register in the top cover, the verification that this is being achieved is done by backwashing with the top register open.

Backwash with the top register open.

The water will come out through that register, and although it may seem a little out of order, it is only from there that you can observe and touch the bed. When you put your arm inside the equipment and touch the bed, the moment when the expansion starts is the moment when the support is lost. Afterwards you can feel the fluidized carbon particles colliding with the skin, and therefore you can detect to what level the bed has expanded.
When the bed is correctly expanded, the water from the backwash is initially highly concentrated in suspended solids, but soon it is as clear and transparent as the water from the influent. At this point a good cleaning of the bed has been achieved. When the bed is not expanded, the backwash water also comes out concentrated in solids, although to a lesser degree than in the case of a correct operation, but it takes a long time – some tens of minutes – to come out transparent again. However, in the latter case the bed has not been properly cleaned, and in a relatively short time it will require backwashing again. On the other hand, decompaction will not be achieved, so it will end up fracturing and the flow will be channeled. Once the correct flow has been found, the next backwashes are done without the need to observe what is happening inside the adsorber.

Procedure to verify correct bed expansion in pressurized flow adsorbers that do not have a top register (as is the case with most fiberglass tanks). Since it is not possible to verify what is happening inside this equipment while it is being operated, the correct backwash flow must be determined in an estimated manner.
To begin with, it is not advisable to have nozzles that are larger than those that are called “distributors”, and which are installed to prevent the carbon from being dragged along during backwashing. This is not the case, as such nozzles are very easily plugged, both during downflow operation and backwash (they are plugged with a minimum number of particles, which in the case of backwashes, are normally carried away by the water: these may be fractured pieces of the same carbon or carbon particles that have lost density by reacting with the chlorine). In addition, they do not allow verification that the bed is expanding correctly.

Not having the mentioned upper nozzles, in the first backwash, the flow is increased little by little, until it is observed that the carbon particles are dragged out with the backwash water.

At that time, it is known that at that flow the bed has expanded the percentage that corresponds to the height that was left free inside the equipment. By comparing these values with the graph provided by the manufacturer, the shape of the actual bed expansion curve can be estimated, thus inferring the approximate flow required to expand 30 to 40%.

How do you know when the flow is insufficient to expand the bed of granular media?

The backwash flow is usually 4 to 15 times that of the adsorption cycle, depending on the bulk density and particle size of the granular medium. Sometimes the pump is not available to displace the flow required to expand the bed e.g. of activate carbon. It can also happen that the water supply is insufficient. In these cases, an alternative that allows effective backwashing without the need to expand the carbon, is to feed compressed air through a distributor that is installed for this purpose at the level of the bottom of the bed, but on the gravel beds if they exist. The backwash flow and the air are fed at the same time. The air flow must be such that its surface speed in relation to the cross-sectional area of the adsorber is between 60 and 80 m / h.

The backwash water is insufficient to expand the bed, as it usually equals the flow of the adsorption cycle. The air promotes such turbulence that it removes the carbon particles, and the water carries the suspended solids.

Adsorber design to avoid the need for increased backwash flow relative to operating flow. This can be achieved by installing, instead of the required equipment, two or more smaller equipment, connected in parallel. When backwashing, all normal operating flow is directed to each unit, one at a time. It must be calculated that this total flow is sufficient to expand the bed of each equipment.