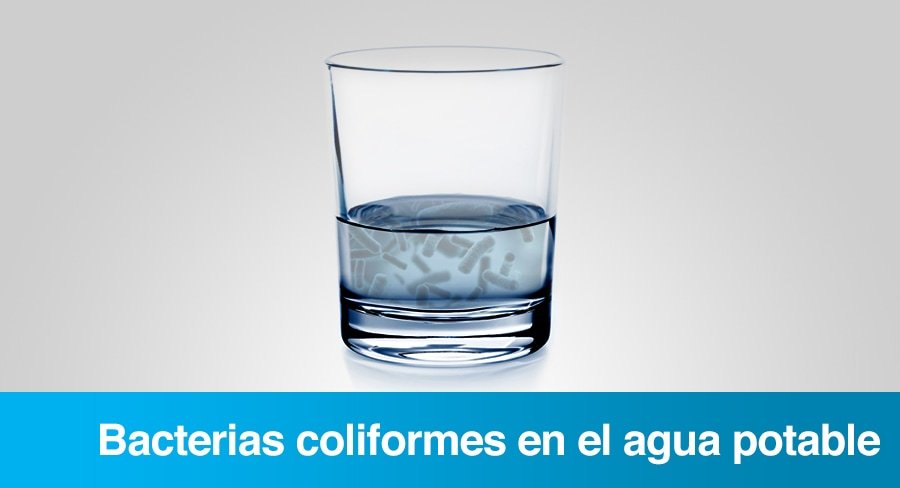 What are coliform bacteria?

Coliform bacteria are a group of bacteria that are present in the environment, plant material and soil, but especially in the digestive tract of animals and humans, and proliferate in their fecal waste.

Total coliform batteries include bacteria found in soil, in water that has been contaminated by the superficial water and in the human or animal waste.

Fecal coliform bacteria are the family of coliforms that are specifically present in the intestine and therefore pass into the feces of warm-blooded animals.
Escherichia coli (E. coli) is the main species of the group of fecal coliforms. Of the five general groups of bacteria that make up total coliforms, only E. coli is not generally found growing and reproducing in the environment. Therefore, E. coli is considered to be the species of coliform bacteria that is the best indicator of fecal contamination and the possible presence of pathogens.

The main cause of water contamination is due to feces, of surface water as are rivers, wells, lakes. The most common reasons are infiltration of cattle feces in open fields, carelessness and provoked or accidental sewage spills, wells near waste.

Coliforms are relatively easy to identify, coliform bacteria testing can be a reliable indication for the presence of other pathogenic bacteria.

What diseases are caused by coliform bacteria?

Most coliform bacteria do not cause disease. However, some strains of E. coli, particularly the 0157: H7 strain, can cause serious illness. The recent outbreaks of disease caused by E. coli 0157: H7 have generated much concern among the population. E. coli 0157: H7 has been found in cattle, chickens, pigs, and sheep. The cases of affected by E. coli 0157: H7 by contaminated drinking water, are the least unlike those found in food that are more dangerous.

The diseases that coliform bacteria can cause are:

Municipal water systems are required not to exceed the limits of the NOM-127-SSA1-1994 standard, and they recommend well owners to test their water for coliform bacteria at least once a year. If you have experienced bacteria problems in the past, it is recommended that you test your well more frequently.

When should I test for coliform bacteria in water?

We recommend spring and throughout the summer, these are the best times to test your well or used fountain, as coliform contamination is more likely to appear during hot or humid weather. Whether the test results are positive or negative, understand that the sample you collected is just a “snapshot” of the quality of your well water. The more samples you have analyzed, the more confidence you have in the quality of the water you are using.

What do the results for coliform bacteria mean?

If coliform bacteria are present in the water you drink or use, your risk of contracting a waterborne illness increases. Although total coliforms may come from sources other than fecal matter, a positive total coliform sample should be considered an indication of contamination.

What should be done if coliform bacteria are detected?

When coliforms have been detected, it may be necessary to include a water treatment system, which we will mention later, but first an important step is to check if there are any infiltration or it is a temporary temporary problem, so we recommend a review and maintenance.

Before looking at the different treatments, let's consider doing maintenance or correcting any contamination. If it is a well, check if there is any source of nearby contamination. You should also make sure that the top of the well has a sanitary cap that prevents the entry of insects and animals. If tests reveal the presence of E.coli, check for any septic system has any leaks, blockages or other malfunctions, especially around the well or spring.

Sometimes coliform bacteria enter the water system from an event of punctual or temporary contamination such as a heavy rain storm, a flood, or the transfer of water from one place to another. For this case you can do a super chlorination "shock chlorination", supplying a high concentration of chlorine to the water for a short period. This is like a quick fix method for removing coliforms.

To confirm the effectiveness of the chlorination, the water is retested in 2 weeks, and reconfirmed after 2 months. If both tests are negative, then it is likely a one-time contamination and has been removed. If not, then you can start a different treatment method.

What are the methods to eliminate coliform bacteria in water?

Chlorination is introducing chlorine into water through a system, either by means of a metering pump or a gravity chlorinator. Chlorine can be liquid or solid. A filter is typically placed before the feed system to remove sediment from the water.

Chlorine removes bacteria from the water, but it is also consumed by organic matter or iron. The calculation of the amount of chlorine to use should depend on the results of the tests for the presence of coliforms and other organic compounds. It is important to note that it should not be used in excess residual chlorine after disinfection, because it can affect the taste and color of the water.

The chlorine contact time for continuous chlorination is typically 30 minutes to eliminate bacteria. You can use tanks or cisterns to cover the dwell time. Chlorine systems must function properly and be replaced regularly to ensure their efficiency.

The relatively easiest, cheapest and possibly the most effective way to keep your water supply free of coliform bacteria. An ultraviolet UV lamp is a metal chamber that internally has a UV lamp. The water flows through the chamber and is irradiated by a suitable amount of UV radiation. This radiation destroys the reproductive system of the bacteria and they die within seconds.

In addition, there must be a pre-treatment before the water before going through the UV, a settling filter to lower turbidity, the water must be completely clear and free of any suspended sediment or organic matter to allow UV light to have the effective transmittance and reach bacteria unobstructed.

Ozonation is similar to chlorinationHere ozone is injected into the water, this is a very powerful bactericide that kills bacteria on contact by oxidation. Ozone is a gas that is produced using an electrical discharge.

The advantage of ozonation is that, as it is a gas, it acts and is neutralized in contact with bacteria and organic matter, and the surplus evaporates, therefore does not leave a residual water for a long time, which makes it often used for point of use. The disadvantage is that it is more expensive than the chlorination and UV radiation system.

To ensure there is no re-contamination after coliform removal, both removal procedures and system maintenance should be used. This ensures that there is no bacteria proliferation in the water in the future and ensures the health of everyone who comes in contact with it.

The mentioned water treatment systems can help you improve the quality of the water you are going to use, you can contact us to present your case and we will gladly help you in the best alternative.

Call:
Online chat
Start chat
We will reply to you as soon as possible.
Click below to send a whatsapp
Reception
Hello! How can I help you?
We will be back soon 7:46