The iodine number as a variable to evaluate the operational capacity of granular (or pelleted) activated carbons.

The above reaction is not the only one that occurs when water is decanted with activated carbon; there are others in which the carbon participates as a reagent or as a catalyst.

Let´s say that the “operating capacity” of an activated carbon is the amount of fluid (gas or liquid) it can handle to achieve a given quality. This quality can be measured in terms of Chemical Oxygen Demand (COD), colour, aroma, free chlorine or some specific compound or family of compounds. The “breakpoint” occurs at the point where the effluent from the equipment containing the activated carbon is of unacceptable quality. At this point, the carbon must be replaced because its life span has ended. The used carbon must be disposed of or reactivated.

The only way in which the operating capacity of a granular activated carbon can be accurately assessed is in the field.

Producers and users of granular activated carbons have looked for physicochemical variables that are simple to measure and that reflect the operational capacity of the carbon. These variables include the adsorption capacity of iodine, phenol, methylene blue, molasses, carbon tetrachloride, butane and others.

The variable that has been most accepted commercially is the iodine number (iodine index), which corresponds to the milligrams of iodine that one gram of carbon adsorbs (on a dry basis), when the residual concentration of iodine in the solution is 0.02 N.

Why do coals with higher iodine count tend to have higher prices?

The number of iodine has been so well accepted that the price of most standard activated carbons on the market depends largely on their value. There are two reasons why iodine number has been well accepted as a variable for evaluating carbons: (a) For certain types of carbons that are activated under certain conditions, the iodine number has been shown to be relatively proportional to the surface area of the carbon (area determined by nitrogen adsorption); and (b) The material and reagents for measuring iodine number are inexpensive, and the time required to perform the analysis is relatively short.

Does the iodine number determine the adsorption capacity of the activated carbon?

1. The iodine number is only proportional to the surface area of the few activated carbons.

This is so for two reasons:

2.1 The adsorption capacity of an activated carbon depends on the relationship between the size-shape of the molecule to be retained, and the pore size distribution of the carbon.

2.2 The adsorption capacity of an activated carbon depends on the chemical structure of the molecule to be retained and the surface chemistry of the carbon.

Because of this, a higher number of iodine does not necessarily correspond to a higher adsorption capacity of the molecule (or family of molecules) that we want to adsorb. It is common to find graphs like the following in the literature: 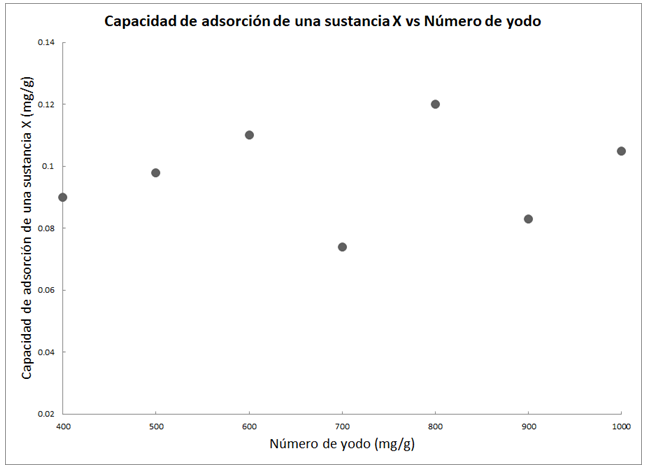 The kinetics with which a granular activated carbon works depends on:

3.1 The distribution of its pore size, as well as the predominant pore diameter. The larger the pore diameter, the higher he kinetics with which the activated carbon works.

One way to show the latter is through the following scheme, in which two columns of granular activated carbon are fed, with the same solution, the same instantaneous flow, the same type and amount of activated carbon. The only difference between the two columns is that, the average size of the carbon particles in the right column is smaller. If you measure the depth of the carbon bed in which the adsorption process take place (depth called “mass transfer zone”, MTZ), it is found that the smaller the particle size, the lower the height of the MTZ. And since the MTZ is lower for the smaller particle size carbon, the break point will occur later, and this carbon will have a higher operating capacity.

Graph: The effect of particle size on granular activated carbon on the length of the MTZ mass transfer zone. 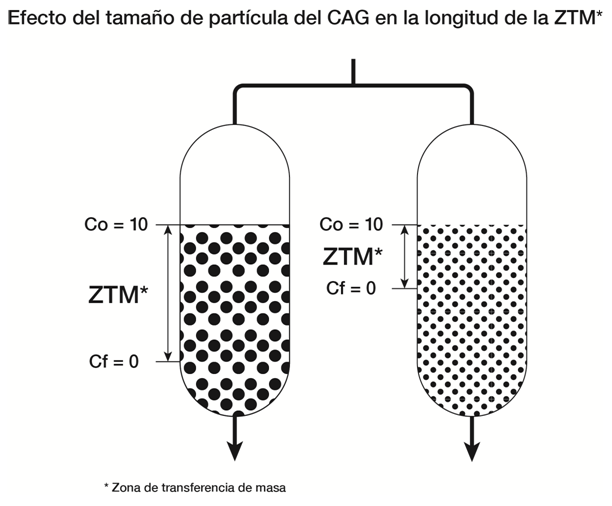