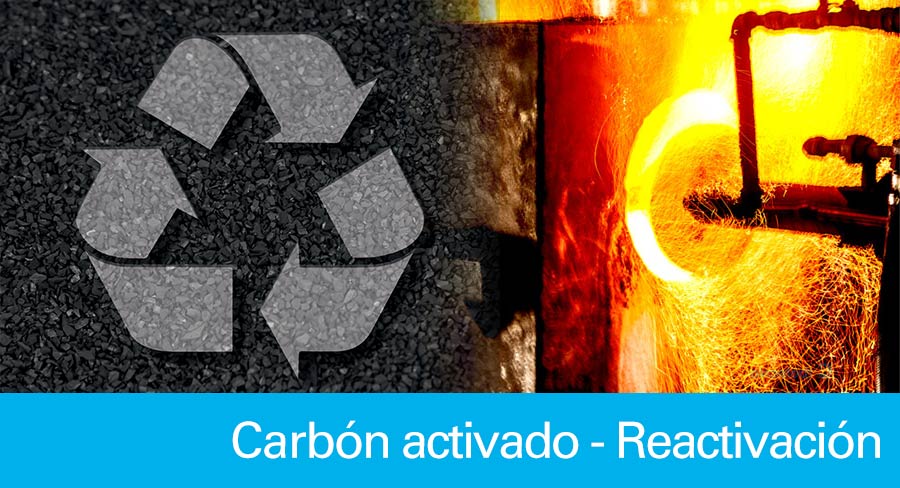 The adsorption process consists of a solid that traps a certain molecule of a fluid (liquid or gas) in its walls. The solid is called adsorbent, the process, adsorption, and the trapped molecule, adsorbate.

Activated carbon is a covalent adsorbent. As such, it adsorbs molecules with a covalent tendency, which is the case for most organic ones. It differs from other types of carbon, because it is more porous and because it is made up of graphitic plates in which the carbon atoms are bonded together in an orderly way. This order makes them less reactive (or more stable) than the atoms that form amorphous carbons.

The adsorption process in which activated carbon participates is due to one of the types of Van der Waals forces, called Londo dispersion forcesn, which occur between a covalent adsorbent and an adsorbate, also covalent. This kind of adsorption is called physical adsorption.

Physical adsorption does not cause a modification in the chemical structure of the atoms and the molecules that intervene in it. Therefore, it is reversible.

If the retained adsorbate is volatile, a sufficient rise in temperature causes it to become detached from the activated carbon. This temperature depends on the volatility of the adsorbate. Both this and the carbon remain in their original state, and the procedure is called reactivation.

If the adsorbate is not volatile, when the temperature is raised to a certain level (usually above 300 ° C), it undergoes pyrolysis. That is, it loses hydrogen and oxygen atoms and becomes amorphous carbon.

If the temperature is increased further, the resulting amorphous coal reacts with the furnace gases, and is converted into carbon dioxide. As it gasifies, it leaves the surface area of the graphitic plates free. In this way, a reactivation also occurs.

As mentioned in previous paragraphs, the graphitic plates that make up activated carbon are less reactive than amorphous carbon, so they do not gasify as long as the temperature and the duration of the reactivation process do not increase more than it should.

When inorganic compounds have precipitated on activated carbon, they cannot be removed by increasing the temperature. However, it is possible to remove them using other methods. One of them is by dissolution in an acid solution.

Different reactivation methods are described below. They are possible, not only thanks to the stability of its graphitic plates, but also because activated carbon is not affected by aqueous solutions in the entire pH range.

Although both granular activated carbons (CAG) and powdered (CAP) can be reactivated, until now, in very few cases the reactivation of the latter has been profitable, due to the difficulty in handling powders, which are usually smaller than the mesh 200.

Profitability in the AGC reactivation process depends on the mechanical strength of your granules. The lower it is, the higher the percentage of material loss due to breakage.

It should be mentioned that an activated carbon that is removed from the process in which it was used is called “spent carbon”.

It is the most widely used reactivation method. It is carried out in furnaces the same as those used to thermally activate a coal. The most common furnaces are rotary furnaces and direct heating multi-stage furnaces (by introducing combustion gases). Reactivation is normally carried out at temperatures between 500 and 800 ° C. The oxidizing capacity of the atmosphere inside the furnace is limited by steam. The volatile compounds are released from the CAG and the non-volatile ones pyrolyze and gasify.

This process is carried out on the same computer where the CAG is applied. It consists of circulating water vapor through the coal bed, usually in a downward direction, so that condensates do not accumulate. The steam causes the volatile organic molecules to shed from the carbon.

This reactivation method is applied in solvent recovery contained in air currents. The CAG undergoes alternate adsorption-desorption cycles. In the first, the solvent is retained until the carbon becomes saturated. In the second, the solvent is desorbed, and the mixture of this and the water vapor is separated by decantation or by distillation, depending on whether they are miscible or not.

The higher the pressure of the vapor used to reactivate the CAG, the higher its temperature, and therefore it will be able to desorb less volatile compounds.

It is the same as the previous one, but it does not use steam but some other gas. In the case of some scientific studies at the laboratory level, in which it is required to reactivate without the interference of any oxidizing gas, the desorption is carried out by means of an inert gas that is heated indirectly. This gas can be nitrogen. When seeking to reactivate at a lower temperature to avoid affecting the adsorbate, reactivation can be carried out under vacuum.

Inorganic salts that precipitate in the CAG are not removed by thermal reactivation. However, they can be removed by dissolution in an acid solution.

This type of reactivation is carried out with hydrochloric acid, since it is the strong acid with the greatest capacity to dissolve inorganic compounds. The solution of about 5% by weight is prepared, and the coal is flooded in it. The dissolution process of calcium salts is slow. The time varies depending on how embedded the charcoal is, but it may take a few hours. To achieve greater speed in the process, the solution is heated to 60-70ºC.

Proper reactivation returns the charcoal to its original black color.

When the retention capacity of a specific adsorbate depends on the pH value, this condition can be used to desorb it. For example, phenol adsorption is highly dependent on the pH of the solution in which it is found. As the pH increases, its adsorption decreases to such a degree that desorption can occur. A charcoal saturated with this compound can be reactivated by a 4% soda solution.

Inorganic compounds that have precipitated in activated carbon can also be eliminated, flooding the carbon in a solution with the pH that produces their dissolution.

The reactivation of activated carbon by modifying the pH in aqueous solution has very few applications.

The biological reactivation of CAG occurs naturally in the treatment of waters with a relatively high content of biodegradable organic compounds. Such is the case, for example, of tertiary wastewater treatment.

Bacteria that thrive on the surface of the coal feed on the adsorbed biodegradable matter and convert it into carbon dioxide and new bacteria. The latter are removed by backwashing the CAG. When activated carbon operates like this, it is called biological charcoal.

A CAG can also be biologically reactivated when it has been removed from the adsorption process in which it was applied, although this process is rare.